Arik: The Life of Ariel Sharon 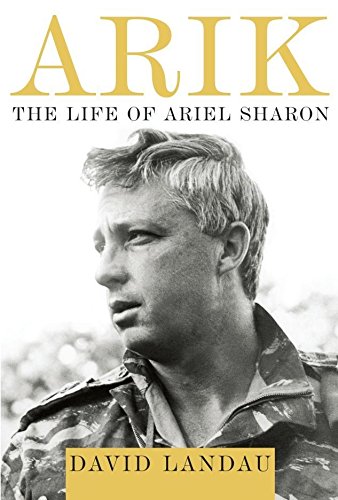 “Sharon lived a life saturated with controversy. Mr. Landau's biography paints a comprehensive picture of Ariel Sharon, a man easy to hate, but harder to understand.”

Mr. Landau's background as a journalist gives the biography a raw immediacy. He also makes the fractious Israeli political scene and its tenuous national security situation in understandable terms.

Ariel Sharon was born Arik Sheinermann in a moshav in 1928. Technically, he was born in the British Mandate of Palestine, a former possession of the Ottoman Empire, and in 1948 following the bloody war of independence, the state of Israel.

He would rise through the ranks from his actions in Israel's numerous wars. On the political front, he would side with the Revisionist Zionists, a rightist group that would later become the Likud Party. (Likudniks will get a double mitzvah this year with Arik and Menachem Begin: the Battle for Israel's Soul by David Gordis, March 2014.) Likud opposed the socialist doctrine of David Ben-Gurion's Labor Party.

Mr. Landau explains these ideological differences and the key players (including Ben-Gurion and Begin). Unfortunately, it is easy to write off the region because the violence is so confusing and constant. For those seeking to be better informed about Israel's political and national security scene, Arik is a wonderful place to start.

Ariel Sharon, like American President Lyndon Baines Johnson, seemed like a political character who became a magnet for controversies. In his military career, Sharon gets blamed for the massacres of Sabra and Shatila massacres during the Lebanese Civil War.

During that conflict, Menachem Begin was Prime Minister and Ariel Sharon was Defense Minister. Like the current Syrian Civil War, the Lebanese Civil War had numerous belligerents (nation-states and terrorist groups), a constantly shifting series of alliances, and horrific violence. Mr. Landau looks into the massacres and the political fallout that occurred afterward. Sharon, ever the curmudgeon, actually sued Time for libel for accusing him of instigating the massacre. He eventually won the suit, but the blood remained on his hands.

Beyond the military controversy, Sharon courted controversy as a Likud backbencher. Like the conservative movement in the United States, he sought political alliances with the smaller religious parties like Shas and the Gush Emunim settler movement. He believed in the territorial sovereignty of Eretz Israel. Earlier in his career, he also asserted the belief that “Palestine is Jordan.”

This assertion became upended with the 1974 Arab League Summit in Rabat, Morocco, that declared the Palestinian Liberation Organization would the representatives of the Palestinian people. It was with this declaration that marked the slow transition of enemy conflict. Up until then, Israel contended with nation-states in conventional warfare. With the Arab League supporting the PLO, Israel had to deal with terrorist uprisings and random violence that threatened to fray the social cohesion.

The parallel to Lyndon Johnson is apt in this case. Both figures fought hard, but were also aware of political realities. LBJ's disastrous Vietnam War policy must be set alongside his tireless efforts to help the poor. His War on Poverty and campaign to pass Civil Rights legislation were of a piece. Sharon, forever a figure of ridicule because of his ferocious militarism and pro-settler support, finally understood the realities of modern Israel.

While deep down he treasured the concept of Eretz Israel, after the terror campaign of the Second Intifada he had to face the political, religious, and demographic realities of the Israeli and Palestinian communities. His response was very Ariel Sharon. In order to stop the terrorist attacks bleeding Israel, he engineered Operation Defensive Shield in 2002.

Predictably, the world was outraged, but the terrorists were quashed with brutal efficiency. But then Sharon organized the unilateral withdrawal from the Gaza Strip. This offended everyone from the settlers to followers of the extremist Orthodox groups.

Despite the coverage Mr. Landau gives these momentous events, he also calls into question Israel's criminal negligence in creating a viable police force in the Occupied Territories. Because of the extreme poverty and lack of policing, these territories can manufacture suicide bombers.

Not to be outdone, even the events leading up to Sharon's hospitalization are couched in controversy. Sharon lived a life saturated with controversy. Mr. Landau's biography paints a comprehensive picture of Ariel Sharon, a man easy to hate, but harder to understand. Mr. Landau does what good biographers should do, explain the life of his subject, but questioning his subject's motivations every step of the way.