Are You Serious?: How to Be True and Get Real in the Age of Silly 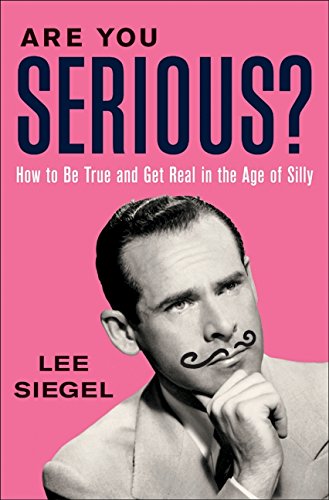 “Cool is the new virtuous.”

Are You Serious? is a serious book most of the time. Author Lee Siegel makes a major contribution with his thoughtful critique of the pretensions to gravitas that seem to pervade today’s culture and politics. It also defines true highbrow seriousness and distinguishes it from pompous pretension.

Mr. Siegel is a proponent of what he describes as organic seriousness—global organic seriousness, in fact. He defines this as the urge to live meaningfully by being fully aware of who you are and your place in the world at every moment. He sees this as different from the work of middlebrow intellectuals who pretend to value life’s difficulty and complexity, while reducing it to easy sentiments and simple ideas, often for commercial success.

Setting the stage for consideration of his definition of seriousness, Mr. Siegel presents some character vignettes; these characters exhibit attempts at being serious. Many are without complete success. He claims the essential elements of man’s search for seriousness are these: attention, purpose, and continuity. This need to search for seriousness is both a religious and a secular quest. It can be a quiet and humble achievement. And there is often a disconnect between serious and status, yet people pursue the latter mistakenly thinking they will attain the former.

Then comes an arbitrary distinction between silly and antic mischief and a proclamation that silly is not the opposite of serious, but laughter is, and how laughter obliterates the false and the insincere, as well as the inauthentic. (So does silliness when done well. Monty Python’s Ministry of Silly Walks comes to mind.)

Lee Siegel describes the importance of play and seriousness as integral to a meaningful existence:

“You choose to be serious the way you choose to keep living. Play and seriousness are both types of freedom; play is the intuitive and improvisatory side of seriousness . . . without the element of authentic play, authentic seriousness does not exist.”

This need for play is yet another reason to defend silliness when silliness is clearly intended, as opposed to silliness that postures as “serious” with scare quotes added.

Are you Serious? Shows how society’s view of seriousness has changed. Moving from an era of high culture and beneficent authority given to the ideas of highbrow intellectuals like Steiner, through a post-WWII “Golden Age of American Seriousness” and self-improvement, there evolved a counterculture driven by the academic Left that equated traditional seriousness with masked abusive power.

So the Left tried to control and dispense their own version of moral seriousness via college curriculums. This led to a new anti-seriousness that deployed irony without sincerity, and sincerity was marginalized. As Mr. Siegel explains, “If you were being ironic and not saying what you meant, then no one could trust what anyone was saying.”

In culture, the loss of seriousness appeared in art meant to unsettle and disorient. It showed up in photographers willing to “do” seriousness for book cover photos. It showed up in fiction writing for profit. When John Updike found himself writing for a living, he was vilified for appealing to a middlebrow New Yorker audience. To make matters worse, he wrote about life in the suburbs, which the Left considered a death knell to ideas.

Once new media arrived, it formalized theatricality, and academics that had taken over for the highbrow intellectuals of earlier eras turned themselves into media celebrities. Serious journalists had to learn to perform. In politics, it became the twisted politics of self-love, all about being watched and not about being thoughtful.

So today, who carries the mantle of contemporary seriousness? For Mr. Siegel, seriousness has taken a new elitist’s defensive posture in the form of sincere comedians. He declares, “The only people who understand the present and it’s constantly evolving crises are economists and tax lawyers, and even they misunderstand.”

Mr. Siegel’s hero of the day is comedian Jon Stewart, but not Olbermann. Mr. Siegel considers Stuart a quintessential Aristotelian great-souled man. In him the irony that replaced seriousness has been replaced by “cool.”

Cool is the new virtuous. It allows Stewart to circumvent the imperative of never being sincere without falling into trap of reflexive irony—another arbitrary distinction Mr. Siegel makes.

For the cool person has no allegiances but possesses an absolute commitment to doing the right thing at the right moment. After 9/11, being serious and being cool meant the same thing, though with intricate variations on sincerity.

While this book is serious most of the time, it occasionally takes a detour to make arbitrary distinctions, for example, between silly and antic mischief, between a career and a calling, between heroism and a job, and it digresses into a finale that forces a secular interpretation upon Dante’s spiritual poetry and then attributes the view to a quite deceased and unable-to-defend-himself Matthew Arnold.

When a highbrow literary critic James Wood labeled author Updike as unserious, he declared that Updike was unable to picture a reality more powerful than his own . . . unable to picture the opposite of his own reality. Are you Serious? seems to conclude something similar about Right and Left today in the Age of Silly. Both sides are unable to picture the other’s reality, so fresh seriousness that entails true listening and the generation of real ideas is no longer the norm.

It is hopeful that this phase will also pass the way of our earlier cultural and political attempts at seriousness, so Mr. Siegel’s organic seriousness—marked by attention, purpose, and continuity—can evolve anew.