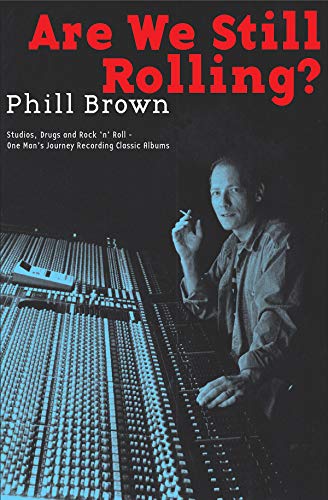 “Engineers like Phill Brown had to pioneer the way music was recorded, giving the albums more life, not less. Perhaps it is time to return to the good old days Mr. Brown describes so well in his book: the days when real music was produced by real musicians and not a little black box.”

No one understands the life of a recording engineer—except maybe other engineers. They are always the first ones in the studio and the last ones out. Days are long, averaging anywhere from 12 to 18 hours. It is not unheard of for sessions to go on for days (40 hours or more) without a significant break.

Vacations? How can anyone take vacations when there is always another track or album to record? Plus, it never fails that at one some point during some session, the favorite and most necessary piece of equipment will randomly decide to quit working. If these are not great selling points for the job, engineers also have to be both psychic and social worker in order to bring out the best performances from notoriously neurotic and flaky musicians.

If you said yes, you would be in good company. Phill Brown decided this was the life for him and in his book, Are We Still Rolling? he catalogs his exploits over a 40+ year career as a recording engineer in the music business. He is not the greatest writer in the world (some of his stories get a little repetitive), but he has had a noteworthy career.

Mr. Brown has worked for various artists in various genres throughout the course of his career, including the likes of Jimi Hendrix, The Rolling Stones, and Led Zeppelin—even though, starting in London in the 1960s, it was almost a given that someone working in a studio would work with one or more of these big names.

Author Brown’s best story, however, came from a session he worked on in 1973 with Bob Marley and The Wailers. In recording “I Shot the Sheriff,” Mr. Brown needed to perform a few edits, so he asked everyone to leave the control room because cutting 2-inch tape can pose some challenges, and he did not want an audience. One of the band members handed him a joint on the way out, and Mr. Brown lit up as he began his work.

The first edit went fine. During the second edit, the joint popped and ash fell on his work desk. For those not in the know, tape is very flammable, and the ash melted about an inch and a half of tape right at the edit point. Luckily, the band had recorded three takes so Brown was able to find another section and fix his mistake. Chris Blackwell (head of Island Records) and the band never noticed. If he had not been able to fix his mistake, it would have cost him his career.

Mr. Brown’s book details many of the various tricks he had to create in order to record the music the way the musicians he was working with heard it. Engineers today have no idea how good they have it. With almost an infinite number of tracks available, ProTools, and other digital recording/editing desks, not to mention dozens upon dozens of effects boxes and plug-ins available, musical talent has almost become secondary—Why play it right the first time when the engineer can just fix it in post?

The great engineers, like Phill Brown, were just as much musicians as the artists they were recording—only their instrument was the console behind which they were sitting.

Creatively recording a vocal upside down in a stairwell or some other weird location because it produces just the right sound is a lost art because now there is a box for that.

Engineers like Phill Brown had to pioneer the way music was recorded, giving the albums more life, not less.

Perhaps it is time to return to the good old days Mr. Brown describes so well in his book: the days when real music was produced by real musicians and not a little black box.