Are We Screwed?: How a New Generation Is Fighting to Survive Climate Change 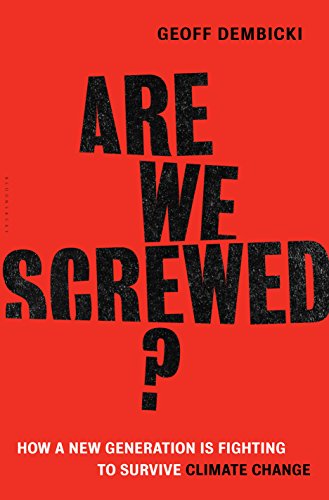 ". . . read this evocative collection of stories about young people who are making a difference in environmental and political stewardship."

“This book isn’t the proverbial canary in the coal mine, it is a sharply written guide to getting enough oxygen to that lovely songbird so it can fly to freedom in less particulate polluted air.”

Scientists from 13 federal agencies have just released a Climate Change report with irrefutable evidence that humans are contributing to the most severe environmental degradation in thousands of years and acidification of the ocean exceeds anything in 66 million years!

For sentient beings this is enough to create a drug or alcohol induced stupor, but there is some good news on the horizon, with Geoff Dembicki’s book, Are We Screwed? How a New Generation Is Fighting to Survive Climate Change. He offers a deft contemporary view of how the future will be impacted by millennials; global warming is one of their most compelling issues.

Dembicki is a Canadian so he is not part of the American Republican versus Democrat divide on policymaking. He offers several stories of individuals who have used their life experience to build sustainable ecosystems, advocate for environmental reforms, and impact the decisions made at the corporate level. We can’t all retire to some self-sustaining island to live, but this book cites real actions that anyone can take to reduce their carbon footprint, advocate for better environmental policies, and build a community of advocates.

Dembicki makes the case that millennials are capitalism’s worst nightmare because they are opting not to own cars, houses, and other material things, thanks to the philosophy of sharing resources, such as Lyft, Airbnb, and short-term rental of goods. A softening demand for cars means less of a market demand for oil, which means a much-reduced role for the petroleum industry. The “petrostate” will still have the plastics and chemical industries that rely on oil, but a huge sector of their industry is waning.

India and many countries in Europe have made decisions to convert to electric cars, as policymakers throughout the world make changes based on market information driven by environmental impacts. Wall Street responds to consumer demands, and the voice of a new generation will change which products are sold and which companies succeed. As Dembicki aptly alludes, the collective voice does make a difference, and the social media savvy of the millennials is unparalleled.

Dembicki emphasizes the necessity for progressive nonpartisan politics to solve global problems. For an insider’s view on The Paris Accords, read his chapter on those machinations and how young people ran across the Arctic, cycled across continents, and all other manner of suffering to raise awareness.

For a much better idea of what a two-degree global temperature rise means, read this book. Most compelling is the quote from Morgan Curtis, a woman who cycled from Vermont to Paris, “We have to construct a different story of humanity, in which people stop seeing themselves as separate individuals floating through earth for scarce resources.”

If you don’t want your future to be in the hands of old white men, do read this evocative collection of stories about young people who are making a difference in environmental and political stewardship.