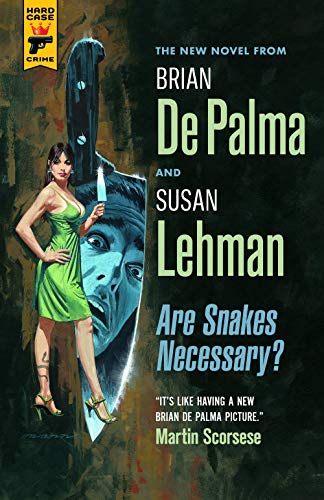 “If the creative writing technique failures don’t bother the reader, they may enjoy the story itself. Otherwise, it is a three-star book.”

Are Snakes Necessary? by Brian DePalma and Susan Lehman is a good news, not-so-good news story.

The good news is that the story’s premise holds water. Senator Lee Rogers, senior senator from Pennsylvania, is up for re-election and his main operative, Barton Brock, is charged with keeping the senator on the straight and narrow and getting him re-elected.

The senator relies on Brock to do this, but frequently has his own plans, and those plans include women not his wife.

The story opens early in the senator’s career, when Brock works for the opposition and hires a beautiful young woman, Elizabeth DeCarlo, to seduce the senator, but the plan backfires and Elizabeth is arrested for solicitation. Brock is hired by Rogers, and his first piece of business is getting Elizabeth out of jail and sending her into oblivion in Las Vegas.

As the story returns to present day, Rogers encounters a past lover, Jen Cours, and meets her daughter, Fanny, who is a videographer and wants to work on Rogers’ campaign. Brock is not in favor of this, but Rogers sees interesting possibilities with the beautiful young woman on his staff. And sure enough, those possibilities become reality.

Fanny falls hard, she wants the senator to leave his ailing wife, Connie, and marry her. Rogers, of course, is not going to do this.

In the meantime, Elizabeth has married a wealthy man in Las Vegas, a man who treats her badly. She meets Nick Scully, a photographer, and cons him into helping her escape her life in Las Vegas. What Nick does not realize is that Elizabeth is also escaping from Nick. Bereft at the loss of Elizabeth, Nick takes a photography job in Paris, France.

Suffice to say all of the characters come together at the end with several interesting twists and unexpected turns, and issues are resolved . . . perhaps not to the best interest of all the characters, and justice may not always be served, but everything is tied up neatly.

The not-so-good news is that the writing is messy and difficult to get through. DePalma and Lehman use an omniscient point of view that is authorial in nature. That is, the reader is told what is going on rather than participating in the story and experiencing the characters’ actions.

Parenthetical asides abound throughout the story, asides that are either designed to be cute little comments or to inform the reader of what they already know. There is also a lot of second person point of view that slows the pace of what is an otherwise good story premise.

DePalma and Lehman use a lot of background that would be better brought forward early in the story. This is another distracting activity that slows the pace.

Some of the characters such a Rogers, Brock, and Fanny have good dimension and feel real. Others like his wife Connie, Elizabeth, and Nick are at times not three dimensional, but are rather flat. Now, this may be due to the omniscient point of view where the reader jumps from one person’s mind to another without ever getting to really know the character.

If the creative writing technique failures don’t bother the reader, they may enjoy the story itself. Otherwise, it is a three-star story.