Archduke Franz Ferdinand Lives!: A World without World War I 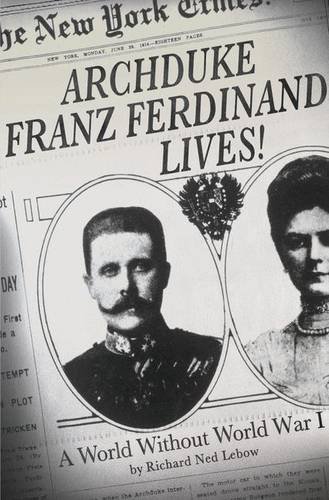 Alternate or counterfactual history is a fairly popular genre of science fiction/fantasy, but is usually dismissed by historians as mere flights of fancy that have no place in academic historiography.

Such skepticism is sometimes justified as many of these tales verge on farce, but there has been a surge of recent writing by military historians that coherently asks “What if?” This has been particularly true of several anthologies of alternate military history edited by Peter Tsouras.

Dr. Richard Ned Lebow, a professor of International Political Theory in the Department of War Studies at King’s College London, has gone beyond the realm of fiction writing to present a reasoned, well argued and thoughtful book on the seminal event of the 20th century, the assassination of Archduke Franz Ferdinand and the beginning of World War I.

By blending alternative analysis, logical conjecture, and a balanced view, Lebow has written a well-crafted book of not only how World War I could have been prevented, but what paths the major powers of Europe, Asia, and of course, the United States might have taken.

Lebow begins with an excellent introduction and essay on the potential use of a well-defined and closely bounded alternative history as a teaching tool to help students understand the role human decisions, errors, and even random chance have on the outcome of history.

By meticulously analyzing the events that led to the Archduke’s assassination, Lebow clearly shows several critical decision points and events of June 28, 1914, any one of which could have been a point of departure that stops the assassination.

His well reasoned argument shows that the assassination was not an inevitable event, and in fact, should not have happened but for poor decision making on the part of many high ranking Austrian officials, not least of which the Archduke himself.

The real value of this book is the scenario development that follows the avoidance of World War I. Lebow is no starry-eyed dreamer, and he lays out both a best and worst case vision of how events might have transpired after that fateful August day almost 100 years ago.

Although these scenarios diverge on the peacefulness of a Europe not torn apart by two world wars, Lebow raises several interesting points. First, even if World War I had been avoided, tensions would still remain and it’s just as likely, as he posits in one alternative, that Europe would have descended into a decades long “Cold War” between England and Germany that still might have culminated in war.

Second, and more thoughtful, is that World War I, World War II, and the Cold War wrought tremendous social and technological changes. The development of penicillin, jet engines, radar, microwaves, and even computers and the Internet was spurred by the military and technology competition of the mid-20th century.

In addition, the advancements in women’s and minority rights were significantly advanced by the intensive labor and military manpower requirements of two world wars. Without Rosie the Riveter and the Tuskegee Airmen, racial and gender advancements may have been delayed for years or even decades.

Although the destruction of World War I can never be morally measured as a cost benefit ratio to microwaves and YouTube, it in nonetheless an indisputable fact that warfare, whether cold or hot, tends to create technological, social, and political change for both victor and vanquished.

This is a highly readable volume that shows World War One was not inevitable, but the result of decisions, chance, and missed opportunities along a chain of events that could have been broken in many places. Lebow’s frank and cogent narration of both a positive and negative outcome to World War I is worth a consideration.

Even if you disagree with his analysis and conclusions, he makes a well thought out hypothetical argument. More importantly, he lends a needed serious voice to the academic use of counterfactual history as a teaching tool to truly examine causation, context, and the inevitability or mutability of history.