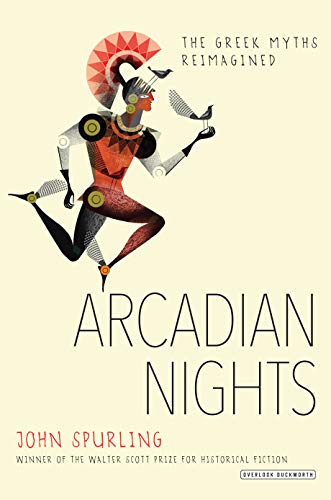 There is a reason John Spurling (author of multiple novels and plays) won the Walter Scott Prize for Historical Fiction (The Ten Thousand Things), and it will become clear in reading Arcadian Nights in which the Greek myths are dusted off from old college readers like Edith Hamilton’s Mythology and given new life in this fantastic collection.

Spurling, now living in Greece with his wife, alleviates the boredom of classically told mythology by interjecting authorial intrusions of his thoughts. Readers join Spurling as he rests on the terrace of his house overlooking the sea, and he wonders if Agamemnon’s fleet passed this way millennia ago sailing for Troy.

Sticking to the usual traditional telling, however, Spurling doesn’t deviate too far from the original tales, though he adds a bit of depth to the characters—where myth-tellers often shrugged their shoulders at why Theseus abandoned the many wives and women, he neatly ties off the threads of those tales. He also interjects modern speech and humor and plenty of sex (Herakles offers up lots of innuendo), but most importantly to readers, he provides context to the tales.

The contents of Arcadian Nights are better laid out than any mythology collection. Following Agamemnon, Apollo, Herakles, Perseus, and Theseus, Spurling leads the reader with Ariadne-like golden thread through the labyrinthine mythology, which sometimes doubles back on itself. He makes it clear to readers, explaining the lineages, the historical timeline, and the physical layout of the map itself until the reader has found herself clear into the modern day with Spurling looking back with some nostalgia at the gods, goddesses, and heroes.

This book absolutely must be taken up by anyone interested in classical mythology, Greek myths, or who is taking those early English college mythology courses. Though Spurling clearly states in his introduction that this book isn’t intended to replace Hamilton’s Mythology or the original translations, this book will be a lot more enjoyable to students, even at the risk of some inaccuracy (like Orestes having asthma). Basing his translation and adaptations from Homer, Hesiod, Herodotus, and the Greek dramatists, Spurling makes this work his own while still remaining true to the spirit of the originals.

Well-written, Arcadian Nights will be difficult to put down. Just when the tales begin to feel a little stale, when the stories start to fall into the trap of being too much told and not enough shown, Spurling works his magic, and the reader is once again hooked and along for the ride. At the back of the book is a glossary of names, and at the front is a map of the Peloponnese where most of the action takes place.

Readers who have never visited Greece will get a small sampling in Spurling’s descriptions—it is clear he loves this adopted country—and will want to book their tickets and explore the islands for themselves, with Arcadian Nights in hand, to find each of those spots where the various mortals, immortals, heroes, gods, and goddesses visited, played, and warred with one another to create the tales passed on to us today.