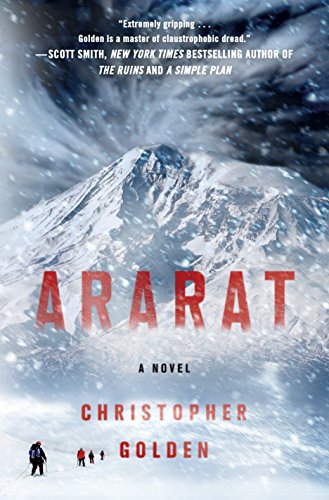 “. . . he could not erase the certainty that the demon was somehow awake and aware, that it knew they were there. That it wanted them there.”

Religious scholars, conspiracy theorists and prayerful archaeologists have spun tales for decades about the possibility of the existence of Noah's Ark, specifically on Mount Ararat in Turkey. Christopher Golden has taken that explorer's spirit and added monsters in his newest thriller, Ararat.

The beginning chapters follow Meryam and Adam, basically Indiana Jones for millennials, who write books and film documentaries of their travels around the world. When they hear rumors that Noah's Ark has been found, they want to be the first ones to the mountain to lay claim to the discovery.

Fast forward to months later, and the reader is introduced to Ben Walker, an agent with Defense Advanced Research Projects Agency, or DARPA, which sounds completely fake, but is an actual government agency that researches emerging technology for use by the military.

Walker is sent to investigate the Karga-Holzer Ark Project and see if there is anything of use there. Under the guise of a representative from the National Science Foundation, he accompanies a UN representative and a priest to the mountain.

What Walker finds is a broken sarcophagus with a mummified, horned corpse inside. Rumors have spread, and with the diversity of religions and beliefs on the ark, there is varied speculation and paranoia about what the corpse could be. Some think it is a demon. Others, a genetic abnormality or possible contagion.

Slowly, as a storm descends on Ararat, the archaeological staff, the local guides, and Walker's companions begin to succumb to a malevolent presence within the ark. Adding to the tension are the internal struggles of Meryam, Walker, and Adam to come to terms with how a biblical demon fits in with their own faith and experience.

The subject matter of Ararat could have gone in several very preachy directions. It is difficult to write a novel about something like Noah's Ark without addressing the religious implications. Inversely, Golden could have gone the opposite route and given the demon a scientific explanation that would have rung false in the context of the rest of the book. He manages a balance of both that is satisfying.

The horned remains within the ark are an evil that is not overly explained or pigeonholed into one specific faith. Each character has his or her own religious convictions and grapples with the discovery. The myriad explanations fit into the narrative of the story without overwhelming the reader with information.

Meryam is Muslim, as are her guides. Adam is Jewish. Then there's Father Cornelius. Golden manages to cast off horror tropes when the classic solutions for demon possession are ineffective. He also manages to give the demon weaknesses that are original, without completely stripping it of any effectiveness as an antagonist.

Ararat has a very large cast of characters. Although Golden differentiates them enough to give them their own space in the reader's mind, some of the minor characters are difficult care about when they are endangered, which somewhat cuts into the tension. However, the main characters are beautifully fleshed out, most specifically Meryam and Walker.

The events and characters are seen through a third person limited point of view from several characters, but the story is the strongest through the lens of Meryam and Walker. They are the most compelling and layered, but to call them protagonists is a stretch. There don’t seem to be any heroes in this novel, just people trying to live until the next day. Even Walker, with all of his bravado, is vulnerable and afraid.

Ararat is less about jump scares, action sequences and gore and more focused on how the characters interact with each other and attempt to overcome the evil in their midst. It is more psychological thriller than survival horror, although by the end, it definitely becomes both.

The last fifth of the book has a distinct tone change as the survivors attempt to flee the mountain and leave the demon behind. It is a distinct pace change from the middle section of the book.

Christopher Golden has written what feels like the beginning of a larger work, from Walker's descriptions of his past adventures, to the twist ending that leaves room for further novels. That might be a misconception, but if Ararat is a standalone novel, it is a missed opportunity to further capture an audience that is now at attention.