Arabella and the Battle of Venus (The Adventures of Arabella Ashby) 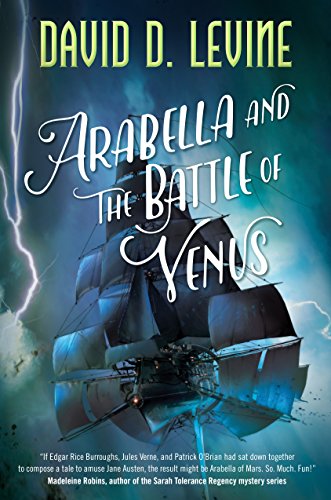 “a delightful, sometimes amusing, always exciting steampunk adventure. . . . For those who like their history heavily dipped in fantasy or their science fiction a bit historical . . .”

The war between England and France has taken to space. At the end of the War of the Sixth Coalition, Napoleon is defeated and sent into exile on the far side of the moon, but now he’s escaped and taken refuge on Venus.

At her brother’s plantation on Mars, Arabella Ashby receives a letter from her betrothed, Captain Prakash Singh, commander of the Honorable Mars Company airship Diana. The Diana has been intercepted by a French aerial man-of-war. “The ship and her cargo and fittings have been impounded and her officers and company held as prisoners of war.”

Though a well-bred young Englishwoman, Arabella is also a spirited girl very much in love, and decides to help Singh escape. “Her husband-to-be was a prisoner of war. This matter could not be allowed to stand.”

First, however, she goes through the proper channels, asking the Governor-General of the Honorable Mars Company, His Majesty’s representative on Mars, for assistance. He regretfully declines. “‘For the Company to intervene at this delicate moment, even indirectly, would be considered an act of war.  Napoleon has already initiated hostilities, but it is important to understand the distinction between the Company and the government.”

Arabella is undeterred. If the Company won’t help, she’ll do it herself. With her chaperone, Lady Corey, for no unattached gently bred female can travel alone, Arabella hires a privateer, Touchstone, and her captain, Daniel Fox, a good sailor with a penchant for gambling. Soon, she, Lady Corey, and the crew of Touchstone are underway.

The journey isn’t without problems. Fox is patronizing as well as flirtatious. There’s also Lady’s Corey’s very superior attitude toward Arabella’s beloved. “Your marriage to Captain Singh would be a dreadful mistake. I do not argue his intelligence and sincerity, but—my dear, besotted child—understand that by openly consorting with a person of his . . . kind, you are bringing discredit to your family.”

Arabella’s outspoken answer doesn’t help. “‘I respect you, Lady Corey, but I cannot count your disparagement of the man I love as a friendly gesture.’”

Partway there, they cross the trajectory of a French ship and a battle ensues. The Diana is captured. Arabella wants to free her beloved, not join him in captivity, but they are now prisoners of war, taken to the same outpost where Singh and his crew are detained.

Undeterred, Arabella immediately begins to make escape plans. Fox is more than ready, but Singh is curiously reluctant. Despite her devotion and loyalty to Singh, Arabella finds herself being drawn to Fox and this disquieting appeal momentarily sidetracks her plan. “She owed her heart, her loyalty, her very life, to Captain Singh. Why did Fox, that vexatious man, hold so much attraction for her?”

An impromptu presentation of Shakespeare’s Twelfth Night, and a face-to-face meeting with Napoleon and his empress bring about a daring escape and the discovery that the French have a secret weapon. “It’s an armored airship.’ The vision leapt into her head, an aerial ship, clad from stem to stern in shining steel. ‘It would be immune to cannon-fire.’”

With the Diana refitted with the secret weapon, Arabella, Singh, and Fox must make a decision deciding not only their fate but also that of the present conflict. “‘If we fire at the French, we run the very real risk of blowing ourselves up in the process . . . do we fight or do we surrender?’”

The rest, as they say, is history . . . but a history of award-winning author Levine’s devising.

Many of the current prejudices of the day, such as Lady Corey’s well-meaning but disapproving attitude toward anyone other than Englishmen are contrasted with Arabella’s love for Captain Singh, as are the manners and morality of the times, in which a young woman, even one traveling on a privateer, must do so with a chaperone.

Weaving into the story actual historical figures—Napoleon and Admiral, among others—provides the proper amount of reality into the reader’s suspension of disbelief, while the French enslaving of the Venusians and the Battle of Brussels fought with airships add that touch of the fantastic, as does a remarkable Venusian pet with a surprising reaction to having its tummy tickled.

The battle of the two armored airships provides a rousing climax that should satisfy anyone’s love of a good tale of nautical sea battles transferred into outer space.

For those who like their history heavily dipped in fantasy or their science fiction a bit historical, Arabella and the Battle of Venus should fit either requirement.