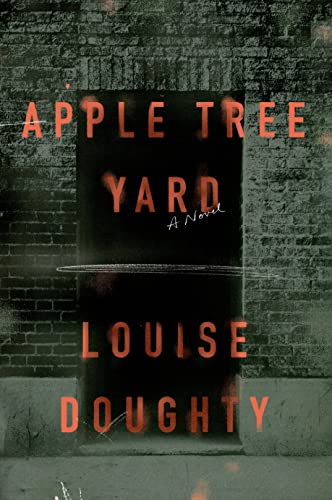 Apple Tree Yard is a suspense novel set in London, England. The story, written in first person present tense, opens with a prologue. Our protagonist is in a courtroom in the Old Bailey with a trial underway. The mood is tense, and the sense of doom is immediate.

Genetic scientist, wife, and mother Yvonne Carmichael is on trial accused of murder. Also in the courtroom and on trial for the same crime is the man who seduced her in the Crypt Chapel beneath the Houses of Parliament.

The author’s detailed description of the courtroom and the jury adds to the gravity of the situation. Suspense mounts when the young barrister mentions a small back alleyway called Apple Tree Yard—and Yvonne almost stops breathing.

The courtroom scene is the culmination of a story that begins long before with a chance encounter after a committee hearing at the Houses of Parliament. Yvonne finds herself drawn into a situation from which she cannot escape.

Part one of the book starts with a letter Yvonne writes to her lover, though we learn right away she will never send it. At this early point, we don’t know if she is obsessed or wracked with guilt. Maybe both. We have plenty of time to decide as Yvonne takes us through a slow account of the day it all started.

While much of the story is told in reflection, the present is sprinkled in with the past resulting in jarring scene changes. Throughout the trial, sitting only a few feet away from her lover, Yvonne reminisces about the affair, details of which are threaded throughout each chapter. Her devotion to him, particularly as we learn more about him, is questionable, perhaps incomprehensible.

The content of the letters to her lover lean toward repetitive. A tedious scene in which the protagonist vacillates over whether or not she should have a cup of coffee slows the text further. Part One of the book is devoted mostly to Yvonne’s affair and is a slow build up to the crucial point at which the story begins.

It is only as the trial progresses that Yvonne realizes how little she knows about the man for whom she has risked everything. For a strong, intelligent woman, this revelation is especially difficult to understand. It exposes her at her weakest and most vulnerable, and we see the power of influence.

The story picks up in chapter eight when Yvonne attends a party and gets a little too drunk. What follows is a horrific trail of destruction on which several lives are changed forever. Caught in the middle, Yvonne’s life unravels as the events continue to unfold outside of her control. It is an emotional journey, albeit a rather slow, plodding one.

Apple Tree Yard is a tale of misplaced trust and the consequences of desire and temptation. One secret can change the course of a person’s life. From a psychological aspect, we are left pondering the question of how well we really know anyone.