App Kid: How a Child of Immigrants Grabbed a Piece of the American Dream 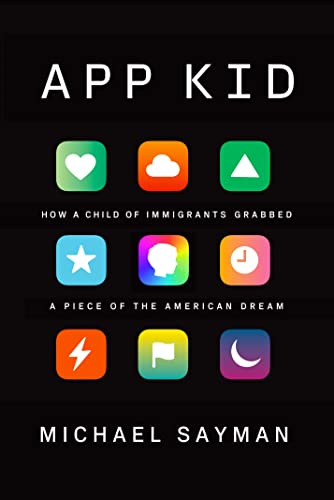 Near the end of his endearing memoir, App Kid, the author, Michael Sayman, describes a talk he delivered at Menlo College—in the very heart of Silicon Valley—where he revealed what he calls his “complicated relationship” with his “own so-called success.”

Sayman looks at the audience and says out loud what he thinks everyone in the room wants to know: “So, what’s the takeaway?” Sayman doesn’t disappoint his listeners. Nor does he disappoint readers of App Kid.

In fact, there’s more than one takeaway in his book. There are several. Some of them are intensely personal. Others are about the state of the world today, the role of technology and the future of humanity.

“What probably worries me most about the Internet is how it’s changing the news we read,” Sayman writes. “We can pick which news ‘reality” we want to subscribe to.” He adds that the features of the Internet “drive an already divided society further apart.”

Sayman maps “the dark side” of the Internet. He points to security breaches at Facebook, where he worked, and “the rise of hate groups” that spew “awful messages online.” He also looks back and admits that in the early days of Silicon Valley very few techies “were focused on what could go wrong.” Of course, plenty did.

Sayman isn’t a pessimist or a cynic. He’s hopeful and optimistic and insists that everyone can do what he did: “learn to code.” As he grows up, learns to network and negotiate, how to get to “Yes,” the difference between impulse and intuition and why being a teen is a source of tremendous strength.

Born in Miami five years after 9/11, the son of a Jewish Bolivian father and a Catholic Peruvian mother, Sayman gravitated toward computers at a young age. As a teen he designed an app that caught the attention of Mark Zuckerberg, who hired him to work at Facebook, where he aimed to out Facebook Facebook.

After a wild ride in Zuckerberg’s magical kingdom, the “wunderkind,” as he was called, moved to Google, where he rejected the collaborative culture of the company and insisted on working in his own cubicle and on his own.

Sayman came out as gay—no surprise there—fell in love with a man named William, broke up with William, and surrendered his identity as a “lone wolf.”

Slowly and sometimes painfully, he learned to become a team player and to ask for help from colleagues. “Seeking guidance and feedback,” he writes, “has been revolutionary for me.”

He’s an odd sort of revolutionary, but welcome in the crowd of anti-racists and anti-sexists. Their battles are also his battles.

At a speaking engagement in South Florida, Sayman told the audience what it felt like to come out as gay. Then and there, he made a vow to himself to tell his “story in its entirety.”

Only he, or perhaps his mother who seems to know Michael inside and out, can judge whether he has succeeded.

Still, it appears as though he has revealed everything there is to reveal: his awkwardness, food cravings and food binges, love of Disney World, addiction to video games, close relationship with his sister, emotional distance from his father, near constant striving for perfection, and his obsession with details.

The app kid is a child of the media: from the movies to smart phones. When he’s hired by Google he explains, “It was like if Dorothy had gotten to Oz and the Wizard had offered her a job. I’d been following the Yellow Brick Road for half my life.”

The app kid becomes an app adult on a mission to make people aware of “the ways our phones trick our brains into delivering brief hits of unsustainable happiness.”

If he can raise awareness about the addictiveness of phones, he thinks he can “help humans take back the upper hand in our relationship with technology.”

Everyone in Silicon Valley should read this book. So should every kid on the planet who has a cell or who craves one. Parents should buy copies by the dozens and give them to students from 5 to 25.

App Kid might do for our technological era what Harriet Beecher Stove’s Uncle Tom’s Cabin did to help abolish slavery, and what Upton Sinclair’s The Jungle did to bring about the passage of The Pure Food and Drug Act. Thank you, Michael Sayman, and may the force be with you.