Apostle: Travels Among the Tombs of the Twelve 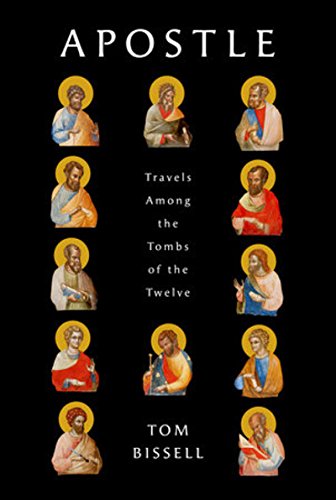 The Twelve Apostles have long been shrouded in mysticism, mostly unknown to Christians other than an occasional mention in the Gospels or Acts of the Apostles.

Tom Bissell tries to bring the story of these amazing men to the modern reader in this volume by answering a basic question: Who were these men, and why did nearly all of them follow to their death a comparatively minor Jewish rabbi? More importantly, how did these mostly uneducated misfits literally change the world by spreading the Gospel of this man Jesus beyond the Roman Empire and into the far corners of the known world, creating modern Christianity with over a billion faithful?

Bissell presents something of a paradox as the author of this book. An acknowledged fallen Catholic and agnostic, he is nonetheless deeply fascinated by Christianity and presents not a work of Scriptural exegesis, nor a screed against Christianity.

The book is an eclectic mix of theology, historicism, an account of his internal struggles with Christianity, and a personal travel log describing his journeys to the tombs of these men.

This makes the book both fascinating and a little tedious at times as Bissell offers his personal commentary on the people and places he encounters in his travels, which occasionally diverts from the overall thesis and flow of the book.

However, this is a minor diversion as the research is deep and well done and incorporates both ecclesiastical and secular sources. In addition to chapters on the 12 Apostles generally ascribed as Jesus first followers, he devotes a chapter each to St. Paul and Jesus.

Within each chapter, the various contradictions and inconsistencies from both the Scriptures and later ecclesiastical texts, such as Eusebius' early history of Christianity, along with writings of early first, second, and third century theologians and Church Fathers are synthesized with an agnostic's critical eye.   Bissell does this with both curiosity and tact, as he clearly grapples with not only how the story of the Apostles came to be agreed upon within the Christian tradition, but also the larger questions of how the faith and its dogma emerged from their lives.

His chapters on Peter and Paul in particular describe the early theological differences on whether and how gentiles could be accepted into what at the time was still a very Jewish-inspired Christianity, showing that from the beginning, Christianity has been marked by differences in interpretation of dogma and theology which began almost as soon as Jesus' Ascension and the beginning of what become the Christian Church.

It's interesting to note that the very first chapter is on the most controversial Apostle of them all, Judas Iscariot, the betrayer of Jesus and for centuries one of the most reviled people in Christian theology. The chapter is somewhat sympathetic to Judas and certainly shows that the Christian interpretation of his role in the Passion has evolved through the centuries. Judas remains one of the more complex characters in Christianity as theologians and everyday Christians struggle with the question of how someone so close to Jesus could betray him for money, feel overwhelming guilt for this act, yet instead of seeking forgiveness through atonement, commit suicide and suffer relegation to the villainy of history.

This book offers a great deal of thoughtful research for believing Christians, historians, and even religious skeptics seeking to understand how these 12 men changed the world forever. Written with tact and thoughtful inquisition, Apostle: Travels Among the Tombs of the Twelve takes the reader though centuries of Christian thought, showing the occasional rocky road of what has emerged as modern Christianity from its beginnings on a hill outside Jerusalem to the far corners of the Roman Empire and beyond.