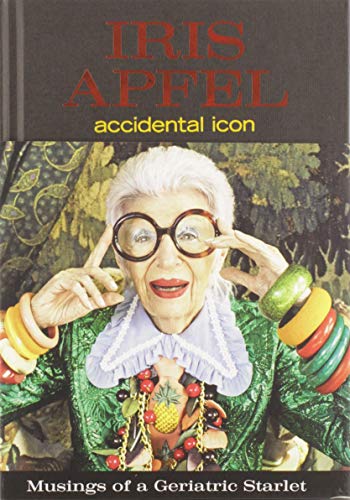 Before you even open the book and begin to take this journey, the reader is assured that this will not be Pulitzer or Nobel Prize material. But what you don’t know is that Ms. Apfel is every bit as engaging, forthcoming, vibrant, and quite endearing as an author and personality who speaks from the heart.

One might imagine that she would be quite self-satisfied and possibly even pretentious when it comes to speaking of her present status as this 21st century nonagenarian fashion icon; nothing could be further than the truth. Apfel takes you on her personal journey, actually her life story, in a very intimate way, giving the reader a sense that she might be sitting across from you chattering on about all things Iris Apfel.

Iris Apfel: Accidental Icon is also a love story whose main players are her late husband of almost 70 years, her family, her friends and most of all her affair with fashion in all its manifestations and permutations, whether shoes, clothes, or any accessory that she might conceive of wearing.

To say that Iris is an original or a one off would be a gross understatement. Not only does she espouse all sorts of so called fashion tips and philosophies but she does it in the most literate and intelligent way. This is no vapid old broad bragging and patting herself on the back preening for attention; Iris is an educated, adept, literate, and astute participant in the world of fashion

One might draw a comparison between her and the late Diana Vreeland but that comparison doesn’t quite hold water since Ms. Apfel is not dictating or lecturing, she merely speaks from her soul and from her life experiences growing up in and around New York City. Most importantly and most endearingly, Iris has a sense of humor about life and of herself which is invaluable given her present “it” status and visibility.

So while this may not be a great literary work, Iris Apfel: Accidental Icon should be read and enjoyed by anyone who loves clothes and fashion, enjoys hearing it from a fashion lover’s mouth, and wants to get lost in a world that is most definitely unique in a time when self-promotion is de rigeur. Take note, Iris claims never to have taken a selfie, never used a computer, does not participate in any social media, and never read an email—and for that alone she deserves a medal. As she says, these tech devices are robbing a generation of their brains! Take that millennials, and listen up!