Anything But Sweet (Sweet, Texas) 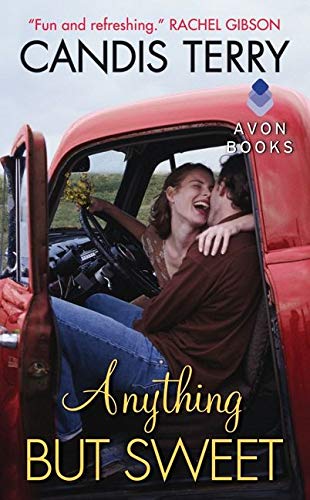 “Anything But Sweet draws the reader into the fantasy of a small town where people view each other’s quirks and foibles with affection, . . .”

The small town of Sweet, Texas, needs a facelift, and Charlotte “Charli” Brooks, host of the television reality show My New Town, is invited to do the job by the local senior citizens.

Although most of the residents welcome her with open arms, there are a few who resist any change to their hometown—and therein lies the conflict. What makes Anything But Sweet a delightfully enjoyable read is the charm of its characters, both main and secondary. They are warm, living people with emotional depths and believable histories.

While Charli has the looks of a television star, at heart she’s a military brat: practical, resilient, and not afraid to get her hands dirty with genuine hard work. To work within the television show’s meager budget, she puts plenty of sweat equity into the makeovers.

The quirky town of Sweet appeals to some deep sense of what she thinks home should be and she works doubly hard to make this makeover stellar, starting with the senior citizens’ center. The success of the project and her warm personality win over virtually everyone in town.

Except Reno Wilder. The adopted son of a prominent ranch family, he has lost too many people he loved and chooses to stay firmly entrenched in the past as way to keep their memories alive. That includes the Wilders’ hardware store where Reno spent many happy hours with his now-dead adoptive father. When Charli decides the dusty, dated Wilder and Sons Hardware and Feed needs renovating, Reno refuses in no uncertain terms.

What starts out as a battle of wills soon becomes a losing struggle to resist the overwhelming attraction Charli and Reno feel for each other. Charli is recovering from a bad relationship so she has imposed a “man ban” on herself, while Reno is still mourning his wife’s death in an automobile accident.

But Charli soon comes to understand the pain that causes Reno’s gruffness, and Reno finds himself revealing more about his past to Charli than he’s ever told anyone else.

Reno is one smokin’ cowboy—and ex-Marine—with a gorgeous pair of dimples that will melt the reader’s heart much as they do Charli’s. His interactions with his strong willed and very Texan mother are pitch perfect, while the abuse he and his equally sexy brothers dish out to each other will leave you laughing.

Charli has a warmth and sassiness that are irresistible. Her strength comes from living with her less-than-loving father, General Thomas Brooks, known as the meanest SOB in the Marines. Her mother died when she was young, so Charli learned to be tough and independent, making her the perfect person to penetrate the hard shell Reno has built around himself.

Ms. Terry has created a strong set of secondary characters in the Wilder family. The matriarch Jana, with her big blond hair and silly pet goat, guides her strong, grownup sons with both love and an occasional kick in the seat of the pants, even as she mourns the death of her beloved husband.

Reno’s adoptive brothers are sexy, interesting men with intriguing back stories, and one hopes the brothers will each have their own books. The affection among the Wilders is palpable; it’s no wonder the rootless Charli wants to join the family.

Anything But Sweet draws the reader into the fantasy of a small town where people view each other’s quirks and foibles with affection, where folks understand and sympathize with how a man’s past affects his present, and where the inhabitants all pitch in to make things come out right. It’s a fantasy as seductive as the love story between Charli and Reno, and Ms. Terry brings it to lively, glowing life.

Award-winning author Nancy Herkness is a novelist and poet, as well as an inveterate reader of international thrillers. Her most recent book is Take Me Home.