Anything Is Possible: A Novel 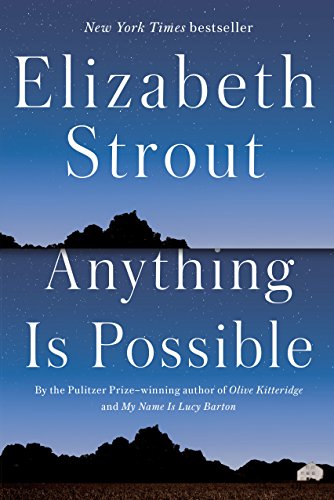 Anything Is Possible by Elizabeth Strout is a beautifully and sensitively rendered companion piece to her last exquisite novel, Lucy Barton. In Anything Is Possible, Strout tells the stories of some of the townspeople and family members who were part of Lucy Barton’s life when she was growing up in small town Amagash, Illinois.

Like Sherwood Anderson’s Winesburg, Ohio, Anything Is Possible too explores in chapters centered on a particular character, the people who make up a little Midwestern American town. Within each story, Strout explores the effects of poverty, social class, war, family, homosexuality, and education. Every chapter is a sort of character study and each person is connected to many of the other people in the novel, including Lucy Barton, who grew up in Amagash but moved to New York City and became a successful writer.

Most of the portraits are of people in pain who have been damaged by their families or circumstances. Using a third-person narrator who takes on the perspective of each particular subject, Strout portrays her characters’ inner thoughts and feelings without being patronizing, sentimental, or highly critical.

For instance, Strout depicts with great sympathy Charlie Macauley, a traumatized Vietnam War vet, who treats his wife poorly and has an affair with a prostitute to whom he gives a large sum of money. Despite his faults and problems, Strout constructs him as a deeply pained and damaged man who is trying to live.

Strout’s writing is both clear and lyrical. She beautifully conveys, in one extraordinary sentence, how Tommy, the school janitor, felt and his epiphany when his barn burned down and his livelihood was destroyed:

“But he had felt that night, while his wife kept the children over by the road—he had rushed them from the house when he saw that the barn was on fire—as he watched the enormous flames flying into the nighttime sky, then heard the terrible screaming sounds of the cows as they died, he had felt many things, but it was just as the roof of his house crashed in, fell into the house itself, right into their bedrooms and the living room below with all the photos of the children and his parents, as he saw this happen he had felt—undeniably—what he could only think was the presence of God, and he understood why angels had always been portrayed as having wings, because there had been a sensation of that---of a rushing sound, or not even a sound, and then it was as though God, who had no face, but was God, pressed up against him and conveyed to him without words—so briefly, so fleetingly—some message that Tommy understood to be: It’s all right, Tommy.”

Some of the other interlocking stories in Anything Is Possible include portrayals of Lucy’s reclusive brother Pete and resentful and bitter sister Vicky; sisters, Patty and Linda, who react very differently to the trauma and harm their mother caused them; Mary, who leaves an unhappy marriage and marries a younger man and moves to Italy; and Dottie, who runs a bed and breakfast and her successful brother Abel.

Anything Is Possible is a deeply moving, often disturbing and heartbreaking, beautifully written and composed collection of intertwining portraits of people from small town America. It does Lucy Barton proud.