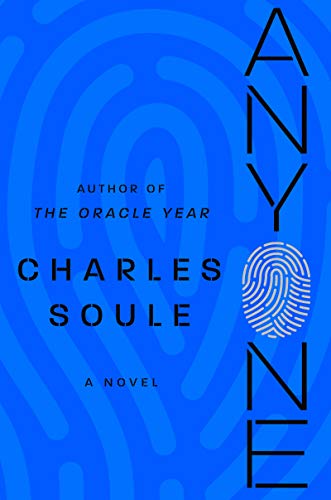 “Anyone is a powerful thrill ride—spellbinding, breathtaking, and thoughtful. Soule pushes boundaries, carrying the reader on an intense, breakneck ride into a future stained by human vanity, weakness, and desire.”

Charles Soule hit the target with his debut novel, The Oracle Year: A Novel (see New York Journal of Books review). He is a very imaginative and resourceful author. In his second novel, Anyone, Soule again delivers thrilling speculative fiction in a fast-paced exciting novel, even more inventive, boundary crashing, and exciting.

Soule bursts off the page with a thrilling story about what occurs when a human mind can be transplanted into another person’s brain. This exciting novel presents the exploits of two protagonists. One is Gabrielle White, a talented Michigan neuroscientist on contract with a soulless Detroit business magnate, Gary Hendricks, to discover an effective Alzheimer’s treatment. Gabby has run out of funding for her Alzheimer’s drug. In a final desperate attempt to discover the cure with her expensive equipment, she accidentally stumbles into a mind transfer with her husband, Paul. Exploding from a barn in Ann Arbor comes a monumental world-changing process that alters civilization permanently. It’s soon called flash.

Simultaneously, we travel 25 years into the future, into the life of our second protagonist, a woman skilled in martial arts named Annami. She has one single-minded pursuit in life: to get even with Hendricks, who took Gabby’s discovery and bastardized it into the machine called “flash” that will transfer anyone’s mind into that of others willing to allow it, and for any felonious pursuit.

Government regulations give rise to a black market for flash, called “darkshare.” Here, any anonymous individual may take over the body and mind of anyone else for any purpose. This becomes a useful vessel for prostitution, robbery and a variety of other criminal pursuits.

In this land of ill-repute, Annami allows people to “rent” her mind in a desperate attempt to earn enough money to buy a few minutes of time in a celebrity’s body during a famous auction. She is frantic to expose Hendricks and his malicious company called “Anyone” that has spread darkshare over the planet, changing the world in a malicious way forever.

From chapter to chapter, Soule interweaves this tale of two women. Gabby is desperate to regain control over her discovery which will certainly change the world for both good and evil purposes. Annami will do everything to find the man who stole and bastardized flash into darkshare. She recognizes that the same technology that can cure many of humanity’s ills, is also being corrupted by darkshare, consuming the narcissism of humans and their desire to live and look like celebrities. It also allows criminals to commit vast crimes while “renting” someone’s body.

The wealthiest individuals around the world are allowed to continue traveling into other bodies and minds, constantly escaping death. In this way, they fabricate criminal organizations that are almost impossible to track. In return for everlasting life, these people are beholden to Hendricks and Anyone, as they are forced to perpetrate crime on his behalf. Annami will not stop until she can tell the world about the evil of Anyone, darkshare and its owner, Gary Hendricks.

Anyone is a powerful thrill ride—spellbinding, breathtaking, and thoughtful. Soule pushes boundaries, carrying the reader on an intense, breakneck ride into a future stained by human vanity, weakness, and desire. For the first time, machines can place anyone into the mind and body of anyone else, whether they are willing or not. This terrifying future explodes into the reader’s mind, building through each chapter into a thrilling ending. There is a tremendous mystery in this book as well, which bursts upon the reader at the conclusion.