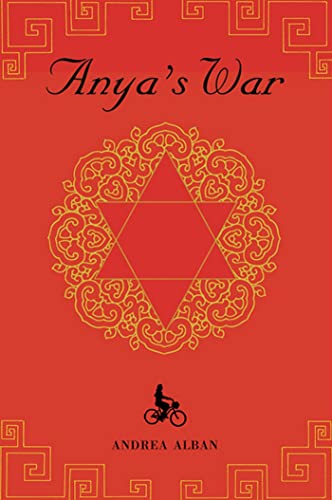 Anya’s War is a tender coming-of-age tale of a Jewish girl whose family escaped to Shanghai from the impending Nazi takeover of their home in Russia.

Fourteen year-old Anya Rosen’s father believed that China would be a safe reprieve for Jews escaping from Hitler’s vow to punish the Jewish people. Although the characters are fictional, the story is real and based upon the author’s ancestors.

Ms. Alban’s compelling characters elucidate the very real terror of Jews living in China during the early years of the Holocaust. Anya’s War is rich with metaphor and reality, a powerful combination during an explosive era of world war and genocide. Ms. Alban delivers a persuasive dose of a dichotomous society where timeless class structure results in domination of the wealthy over the poor. Anya was raised in a moderately wealthy family in Odessa, which was transformed into an upper-class family in China. She soon became immersed within a culture that included suffering, yet devoted servants and the condescending wealthy.

Anya arrives as a typical adolescent, filled with curiosity, plans within plans and a burgeoning interest in boys. Like many adolescent girls of the time, Anya has natural heroes. She greatly admires Amelia Earhart and Eleanor Roosevelt. She also plans to live in The United States and become a physician, like her aunt. Like all teenagers, Anya fights with her parents. She is especially defiant with her dominating mother, who has other plans for Anya’s career. At the same time, Anya explores deepening feelings for a boy in her class at school.

Woven into Anya’s life are her doting parents, grandparents, brother, friends, and servants. Except for her parents, these characters possess rudimentary depth. Yet, the events and circumstances surrounding Anya are described with delightful depth. Ms. Alban’s descriptions of life in China are terrific, and she pulls the reader along with vibrant flow and intensity.

Because she lives in relative wealth and attends the Jewish school in Shanghai, the morass of subjugation, starvation, and hopelessness prevalent among Chinese remains just below Anya’s radar. Anya races around Shanghai in her bicycle, visiting friends and running errands. She has a new camera which she uses to take pictures along her way. Anya takes advantage of her newly-acquired ability to bargain with sellers in the market.

One day, Anya discovers a discarded newborn girl in a basket. She brings the baby home, to the horror of the entire household. Anya immediately loves and cares for the abandoned child. She is determined to keep the baby and proffers the child a name. At the same time, her father brings home a new Jewish family in Shanghai, including a boy who sweeps Anya off her feet.

One day, Anya’s younger brother follows her on an unapproved trip into Shanghai, during which a Chinese bomber accidentally drops bombs upon the city. The resulting disaster leaves Anya’s brother seriously injured. Alone and deeply frightened, Anya must find a way to save her brother’s life.

Ms. Alban brings to light that mystifying, confusing time of life in which Anya is neither child nor adult, but some stage in between. This story becomes an exploration of adolescent desire and passion, a newfound freedom chained with responsibility, underpinned by the desire to remain a part of a nurturing, loving family.

Alban’s writing style is structured, cogent and evocative. Her protagonist and the primary characters are entertaining, well developed and delivered with expressive dialogue. They induce depth and fervor. Anya’s character is powerful and seductive. One can feel her empathy, defiance, curiosity and passion. However, the secondary characters are less well developed, leaving the reader with a somewhat murky sense of their personality features. The family’s Jewish identity is carefully elucidated through the manner in which they honor the Sabbath, observe holidays, recall the past and enjoy valued traditions. Interspersed in the dialogue are Yiddish words used to convey more expressive meaning.

Anya’s War is a powerful novel of cultures, adolescent emotions, aspiration, passion, fear and anticipation. Within it, we glimpse wartime China, its deep-seated traditions, structures, classes and beauty. Ms. Alban also delivers the devastation, anxiety and terror of war. Here we find a bright, expressive teenager named Anya, who is struggling to become an independent young adult, learning valuable life lessons from venerable servants, friends and family. The pace of this novel increases exponentially, with an explosive conclusion.