Any Duchess Will Do (Spindle Cove) 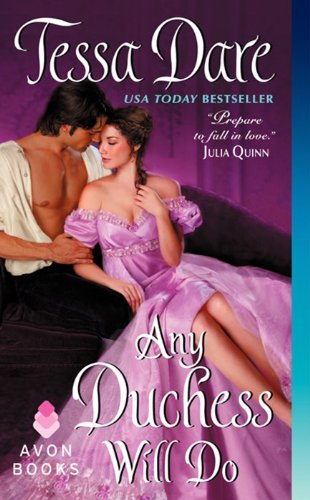 “. . . a well written, engaging historical romance about the power of love to change two people for the better . . .”

Any Duchess Will Do appears at first glance to be the tale of a typical rich playboy/poor girl love story. In many ways, it is just that. But the story is deeper, richer, and more satisfying than a simple trope.

As the novel opens, Griffin York has been kidnapped by his mother and brought to Spindle Cove, or Spinster Cove, as some call it, in order to find him a wife. At nearly 35 and an unmarried only child, Griffin could be the last of his line, or so his mother despairs. So she asks him to choose a wife from among the single ladies in a pub.

To thwart his mother, Griffin chooses Pauline, a serving girl, mud-splattered and coated in sugar from an earlier incident at the general store.

Pauline agrees to go with Griffin and his mother who are clearly working at cross-purposes. The duchess promises to change Pauline from a commoner to a duchess in a week, and Griffin promises Pauline the astounding sum of one thousand pounds if she'll fail miserably under his mother's tutelage. She agrees, needing the money to get herself and her sister away from her abusive father.

So begins the journey of discovery for both Griffin and Pauline as they spend a week together that will change both of their lives.

Pauline is a self-assured heroine, even as she is thrust into a world she doesn't really understand or want to be a part of. But keeping her goal in mind, she's able to navigate through society with surprising aplomb and grace. She never loses herself and never pretends to be something she's not.

Pauline never really fits in, so this is not a rags-to-riches story in which everyone suddenly changes and accepts a serving girl into society. The great thing about Pauline is that she knows she'll never be accepted and doesn't fool herself into thinking otherwise. She just wants to last the week with her heart intact so she can get back to her sister.

Griffin, for his part, isn't a typical historical romance rake. He has a past, to be sure, but he's a man suffering a personal tragedy that holds him back from truly enjoying life. It's a secret he's keeping from everyone in his life, his mother included, and is the reason he never, ever wants to marry.

As expected, Pauline and Griffin begin a relationship, but it feels natural and genuine, despite the situation into which they've been forced. That these characters develop such strong feelings for each other after a mere week together is almost implausible, but the author does an excellent job of making the reader forget that they've known each other for only a short time.

Overall, Any Duchess Will Do is a well written, engaging historical romance about the power of love to change two people for the better, while still allowing the characters to retain their essential selves.