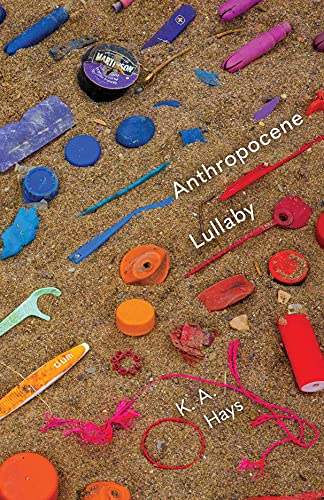 “For those who think ‘nature poetry’ should be an escape from the human world, Hays provides a much-needed corrective, consistently reminding the reader that humans are nature, too, that while we wreak havoc in our willful ignorance, attempting to partition ourselves from the other life on this planet, it’s merely an illusion.”

Starting with her first book, Dear Apocalypse, and continuing to the present with the publication of her fourth collection, Anthropocene Lullaby, K. A. Hays has consistently addressed the threat of humanity to itself and other living beings, offering introspective meditations on wide-ranging species, including a vast array of wildflowers, birds, fungi, and macroinvertebrates. Yes, here is the poet who praises the crab for all its wonder and virtuosity!

Along the way, the birth of her two sons has deeply informed her poems, and like so many parent-writers, the worries for a future her children will inherit and inhabit are dramatized on the page with tenderness and love, as well as the anxiety that accompanies such caring.

In a particularly moving prose poem, she sits with her son in an ER after he has fallen at the beach, a sharp stone embedded in his knee. In the background, a television reports on the dire state of the world’s ecosystems, suggesting that, like the poet and her son, the world is also in need of emergency care:

Hays tackles with great invention and complex prosody our current geological epoch, the Anthropocene, which may be defined as the age in which human activity has been the main influence on climate and environment, often to disastrous effect.

In the book’s title poem, the poet offers an understated, if apocalyptic, farewell—“Goodbye to us, the seas high, the sun / intensified.” Yet such a salutation is not full of egotism or self-pity. As she writes a few lines later, “The dead of other epochs breathe with me, / but I’m becoming all too flush / with screens, a host /of pixie-pixels.”

The technology we’ve become increasingly obsessed with and controlled by— absorbed into its ever-expanding matrices—appears again and again over the course of the book, often named and called out for its intrusions in such poem titles as “From my pocket on a hike, a tone warns me” and “Anxiety checks her phone again.” Similarly, the detritus of our hyper-consumerism and throw-away-culture marches across the book’s stage, taking the form of direct address to a Mountain Dew bottle, as well as in “lines written” in a Walmart Supercenter parking lot.

For those who think “nature poetry” should be an escape from the human world, Hays provides a much-needed corrective, consistently reminding the reader that humans are nature, too, that while we wreak havoc in our willful ignorance, attempting to partition ourselves from the other life on this planet, it’s merely an illusion.

Hays is very much a poet of nature, which includes the breadth of her impressive knowledge of natural history. But she insists that the encroachment of the human world on the more-than-human world, often in the despoilation of the latter by the former, must be included in any poetic engagement.

In “Lines Written on Jasper Beach, Machiasport, Maine,” the poet observes “a being, who was pulled out of my body nine years ago” building a city from the available resources: stones and sticks and sand. Hays deliberately dislocates the language in this scene to provide the perspective of a mother observing her child with a degree of detachment, even bewilderment. What isn’t clear in the poem is whether the poet has intentionally worked toward this state, or if the larger anxieties of raising a child under the threat of climate collapse organically creates the disjunction—and there are plenty such disruptions throughout the book. Here, once again, it is the interruption of technology into the more-than-human landscape that causes the reader to pause:

warning of the end times,

but it’s my iPhone. I slide its sleek body

from my pocket, scan a notification:

WE JUST EXPERIENCED THE HOTTEST JUNE ON RECORD

AND IT’S PART OF A LARGER TROUBLING TREND.”

In the wake of this pronouncement, the child’s “city” is destroyed, the sea and the elements ultimately defeating the best attempts to build against them. What’s predictable, even innocent, in this poem becomes magnified:

“My child is squinching his forehead.

I know how to build it better, he says, dragging

toward his broken knees a red rock,

and balancing it on the trap, careful,

careful, as if he alone has been charged

with saving it all.”

How to navigate a world of natural disasters, of human-made disasters, of pandemic and death, of birth and life, of connection and disconnection, all while trying to make ends meet, doing one’s job, loving one’s family and friends? These are the harrowing and swirling questions confronted in Hays’ poems. And simply asking such questions, presenting them to readers as a shared dilemma, is more than worthy of any good book.

But perhaps what makes Anthropocene Lullaby an exceptional book is the ways these poems provide negotiated, provisional answers, a means for living beyond despair’s ultimate victory.

To do this, the poet does not peer through rose-colored glasses, ignoring the catastrophic present and its implications for any kind of possible future. Rather, she insists, for herself and for those who choose to accompany her in these poems, that we recognize what remains, what still grows, to bear witness where the green-fuse of life still bursts, as Hays does in a poem whose title bleeds into the opening lines:

to hear the warbler who the guidebooks say

between boulders, its antlers testing, testing,

meeting the thisness of all this this

Such jubilance in bird song imitated by the field guide and embraced by the poet, couched in the question of what is safe, asked by the antlers of that small snail—here is recognition and connection and celebration in a captured moment of presence.

Hays uses this scene to mirror our present predicament, and she looks to other sources for help navigating it, including the paintings of Mark Rothko. The poet also wields a dark, absurdist sense of humor in the tradition of Margaret Atwood and Kurt Vonnegut, cajoling and reprimanding through an ironic tone in such titles as “My New Year’s resolution is to become a plant” and “I think my species needs to go or change so much it may as well have gone.”

The book’s final section, written in direct response to the current pandemic, demonstrates the emotional pendulum so many of us have precariously ridden the past few years.

“Meditation on the here” begins with the sounds and smells, the inhalations and exhalations of a waste treatment plant and closes with a litany of “hereness,” reminding the reader not to squander life’s gifts:

a tiny part of which

but understanding the scattering and unfolding

which is joy and is sorrow,

this joy, this sorrow, this joy,

this soothing, this balm, where elements play—”

Within this “play”—part of the negotiations, the provisional path—the poet confesses that the “heart in which / the tree and I and the moss are no bigger than atoms /. . . know about as much as atoms do about the whole.”

This is not the willful ignorance which has led us into the Anthropocene but the ignorance of the human mind when faced with the vastness of existence, our infinitesimally small place in this universe. This is humility we would do well to seek wisdom in.

And in the book’s final poem, “For the Post-Anthropocene,” the poet implores us to remember what might come after, what our legacy might be if we listen to the lives of other species, “to serve the larger body / in which my body’s just a cell . . . so other bodies may go on.”