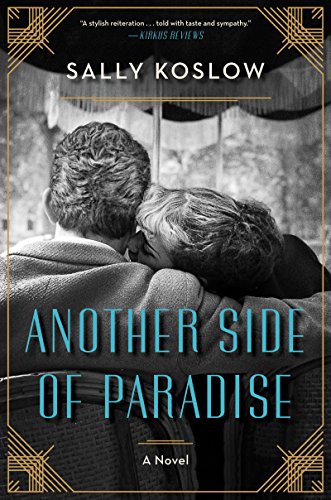 The story of F. Scott Fitzgerald and his wife Zelda Sayre has intrigued readers and fans for decades. But, as Sallie Koslow deftly explores in Another Side of Paradise, Zelda may not have been Scott’s only great love.

Sheilah Graham is a woman with a storied past. After being taken to an orphanage by her mother as a small child after her father leaves her family, she has had to rely on herself from an early age. While acting served as a way out for young Sheilah, she realized early in her career that she didn’t have any real talent, at least not the kind that would bring her the success that she dreamed of.

Although she may not have been a great talent on stage, in her life, Sheilah was the penultimate actress, creating an elaborate story of her upbringing, her time at boarding school and even taking on a beautiful British accent to cover up the fact that she actually grew up in London’s slums. She is enamored of the wealth, privilege and power of British society and manages to become one of them.

Even still, she spends quite a bit of time staying quiet, afraid that her true roots will show through. She plays the part so well that she even receives a marriage proposal from British nobility. She admits that she never truly loved him but she realizes he can give her the kind of life she has always dreamed of. Even still, she never expects that he will be able to convince his mother to allow their union.

Tired of pretending all the time, Sheilah decides to move to the United States, a place where breeding and background are far less important and working your way up is valued. As fate would have it, right as she receives word that her fiancé’s mother has, against all odds, agreed to the marriage, a man catches Sheilah’s eye—and her heart. When she meets Scott Fitzgerald, he seems to be a bit of a relic. A now mostly disgraced author, he is working in Hollywood trying to make ends meet, even dressing in the style of the 20s that he loves writing about so much.

Acting might not have been the perfect fit for Sheilah, but she soon discovers that writing is. In Hollywood, she becomes one of the preeminent gossip columnists, dishing the dirt each week on the actors and actresses that have recently captured America’s heart. She not only writes well but also has a talent for endearing herself to the people she needs to know to feed her readers’ appetites.

Fitzgerald is sober when Sheilah meets him, and, as Koslow portrays, perhaps the world’s best boyfriend when he can stay that way. Attentive and loving, he is there for her in every sense of the word, even aiding her education in their “College of One.” As the pair falls more in love, Sheilah finally reveals the secret to him that she has never told anyone else. She reveals her Jewish roots, her true past, and the often horrific road that she took to success.

Fitzgerald’s bouts with drinking and his painful journeys to sobriety—not to mention the fact that he is still married to Zelda, who is in a mental institution—make for a tumultuous relationship and separates the pair for stints in between. But, ultimately, it is their love and passion that binds them.

Although Scott and Zelda may be the love story that has been talked about for decades, in the talented hands of Sallie Koslow, the story of F. Scott Fitzgerald and Sheilah Graham becomes another one for the ages. Another Side of Paradise is a heartwrenching and beautiful story of true love and selfless sacrifice that shows another side of one of America’s most beloved writers. It is a necessary addition to the collection of any historical fiction or Fitzgerald lover.