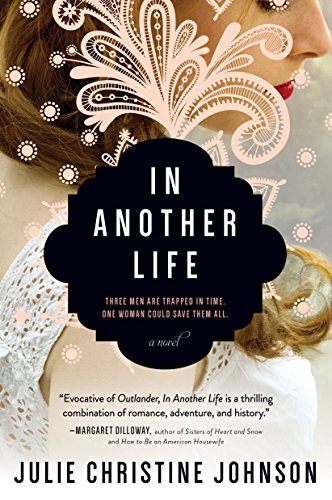 It is said that every human being on earth has a doppelganger, but what if yours lived an exciting, dangerous life 800 years ago and now you’re invited to participate? Lia Carrer, protagonist of Julie Christine Johnson’s debut novel In Another Life has intimate knowledge of that scenario.

Following the tragic death of her husband and her subsequent job loss, Lia has returned to her native France to finish her graduate thesis on the Cathar Crusade. Her research and connections soon plunge her into the midst of a centuries old mystery and introduces her to three mysterious men who each want her . . . or are they searching for an 800 years dead woman with Lia’s face?

In Another Life is a sprightly entry into the historical romance genre, emphasis on “historical.” The Cathar region, which lies between in southwest France and borders Spain was, in 1208, the site of a great Crusade of the Catholic Church, bent both on avenging the murder of a Papal emissary and conquering heretics. Cathar history tells the story a bit differently, viewing it as a land grab. Johnson takes the tack of giving credence to the Cathar point of view, and in doing so she tells a marvelous tale while still acknowledging the accepted history of the region.

Johnson is clearly striding in the footsteps of authors like Geraldine Brooks and Diana Gabaldon in her juxtaposition of the modern and historical, and though she hasn’t the surety of either of these more experienced authors, she does a neat job of fleshing out times past.

There are no jarring modern anachronisms in speech, dress, or behavior in her sections dealing with the past, which is often an issue with debut writers. She even heads off the inevitable comparisons to Dan Brown’s DaVinci books by confronting the mystery head on and having Lia comment wryly that her suspicions about the underhanded role the Knights Templar played sound like something out of “the recent popularity of books and movies that mentioned the Knights Templar.” That was nicely done.

Like Brooks and unlike Gabaldon, Johnson has chosen to deemphasize the romantic aspect of her character’s story. There is a romance and weak stabs at making it the ever-popular love triangle, but it is perfunctory (aside from one abrupt sex scene). Johnson seems to be more interested in relating a “what if” about a crucial point in history, and she handles that well.

Aside from Lia herself, who is off-puttingly whiny and unconvincingly dense when she needs to be otherwise (even after we’re told that she’s brilliant and strong), the characters in In Another Life are entertaining. Raoul is heroic, but he is also a layered character; we see his good and bad characteristics and are introduced to a real dilemma when he is forced to choose an era. Lucas is not Snidely Whiplash bad; his motivations in both eras are clearly defined. Even the portly priest, Fr. Bonafe, is given a believable backstory and external motivation. Peripheral characters are sketched, at best, but that’s to be expected given the length limits imposed on debut writers by publishers.

If Johnson fails anywhere, it is in the surfeit of description, adjectives, and adverbs. Minute descriptions of Lia’s outfits and everything she eats and drinks get stale rather quickly and in sections slow the action to a crawl. The same can be said for the numerous adjectives and adverbs. Not every noun or verb needs modification (especially multiple modifiers). This author does her best work when she forgets she’s writing and the story flies along. This happens most often in the historical sections—they really are lovely.

As historical fiction goes, In Another Life is a strong debut by Johnson. As a romance . . . not so much. Read this one to learn a bit of history and to admire strong characters doing daring things.