Another Brooklyn: A Novel 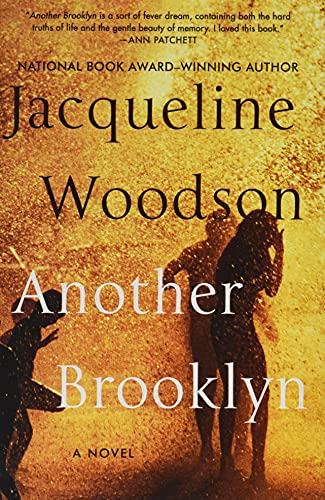 “quickly read but not easily forgotten. It’s a lovely story . . .”

Jacqueline Woodson’s talent as a young adult author shows through in her poetic rendering of this coming-of-age tale about four girls growing up in 1970s Brooklyn. Reminiscent of books like Paule Marshall’s Brown Girl, Brownstone, Sandra Cisneros’s The House on Mango Street, and the beloved A Tree Grows in Brooklyn by Betty Smith, Woodson paints a portrait of adolescence that is poignant, sad, and occasionally comic. Whatever her tone, one thing is certain: She gets what it means to be poor, black, and yearning.

Her story is one of memory, friendship, loss, and love. Set against the backdrop of a changing Brooklyn neighborhood in unsettling times, the deep friendship between the narrator, August, and her friends Gigi, Angela, and Sylvia, spirited girls who “came together like a jazz improv,” is palpable. So are the feelings conveyed in simple, short vignettes—moving stories that reveal a beloved mother who is “coming soon,” a father striving to do what is best for his children, a child clenching her fists but unable to speak the unspeakable, a daughter trying to live up to her father’s expectations, a young girl longing to dance.

How do young girls find themselves as they mature in the midst of drugs, sexual abuse, absent mothers, strict fathers, dubious boyfriends, and changing times? By sticking together, as these four feisty survivors know, until an act of betrayal alters everything, causing August to wonder if their dreams were part of “another Brooklyn, a different time.”

Woodson has said of her novel that she was inspired to write it by the women in her own life, a “village” that kept her “fed and moving through the world.” She wondered how deep friendships form and what breaks them. “What back stories do we bring to our relationships? How does one let go?”

Against a backdrop of the black power movement, street violence, a father’s religious conversion, and the haunting absence of her mother, August, who grows up to become a cultural anthropologist, shares memories that help answer those questions as she recalls, explains, and makes sense of her life.

Written in lyrical prose, this is at once a heartbreaking and heartwarming novel. The simplicity of its language enhances the depth of emotion it shares as it conveys a powerful grasp of human nature. Described by one critic as “a sort of fever dream,” it reveals some of the hard truths of life through “the gentle beauty of memory.” That’s an apt description for a book quickly read but not easily forgotten. It’s a lovely story told with tenderness and talent, perfect for a quiet day in which to savor its powerful gift.