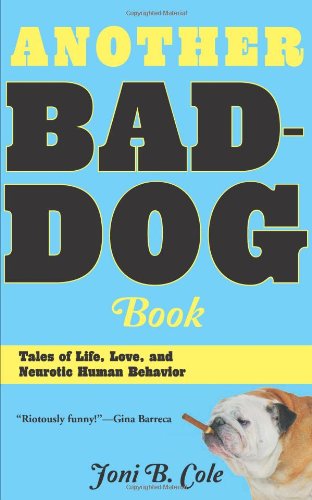 “Joni Cole’s voice may be brutal, but readers, drawn to turn to the next page, will be rewarded: She is funny—and so is her gutsy book.”

The title, Another BAD DOG Book, will puzzle prospective readers when they see the table of contents, since only the first and last of Joni B. Cole’s 28 essays are dog focused. After readers get over the shock of author Cole’s very tough and rough, rude and crude voice, it might not take them long to conclude that Ms. Cole, herself, is the Bad Dog of the title. Certainly, she casts her opinions with abandon and without restraint, commenting on society, do-gooders, rustics, human foibles, American institutions, and even her own friends and family members.

Her reflections are often as biting as those of Juvenal, the ancient Roman writer and perhaps the father of the genre. Although Ms. Cole is aware of the strength of her words, they often ring unkind to the reader, like a description of a very old woman: “It appeared I was also the youngster in our group. The woman directly across from me must have been close to one hundred, her pallor reanimated with a shaky hand—scribbled brows, a smear of dark pink liplines, two uneven spots of rouge.”

But then, Ms. Cole smartly redeems herself, adding, “I wished I was sitting next to her. I like talking to really old people.”

Her descriptions frequently are nearly sophomoric in their vulgarity, but readers cannot miss her point as in her aversion to herbal tea (“it smelled funny, like a urinary tract infection.”) Then Ms. Cole admits, “I thought meanly.” This author clearly enjoys her status as Queen of Mean. She ably juggles criticism and self-deprecation, and perhaps that feat results in forgiveness. But her self-deprecation is repeated many times, and readers may come to doubt its sincerity. Ms. Cole’s voice, as narrator, is selfish; she explains that she has mastered “learned selfishness.” Readers may or may not believe that the author in person is selfish.

Nevertheless, readers will identify with much of what the author feels, but they might gasp at Ms. Cole’s cruel assessments. Her language has a tone of near vengeance against the many things that disturb her: social pretension, silly or meaningless family routines, inaction, helplessness, stupidity, etc., but these are the very things that also disturb other perceptive women. Readers might think, “This has happened to me. I was embarrassed or I was disgusted or I was hurt. I have much in common with this author.” There is a steady stream of ironic observations in each essay, and although the author’s actions often backfire, she does not let her opinions go easily.

Another Bad Dog Book is well written chick lit: novels and essays written by women for women. In Ms. Cole’s case, the essays are written for strong-minded women. This is not a cute, loving book. Currently, this particular subgenre, one that usually targets young liberated women, is growing, even as the literati seem to gripe about it. The genre can be called realism, and the popularity of Ms. Cole’s book is due to both humor and realism.

Actually, Ms. Cole does dabble with the other branch of chick lit in Another Bad Dog Book, and that is romance. In one chapter at least, The Boy of Summer, Ms. Cole relaxes her criticism and pokes fun at the romantic dreams of a teenager, herself at 16. The chapter is a tour de force. Her description of a teen’s hormonal changes involves calves’ livers at the meat store where she was working. The chapter is vivid, but kind and true. She compares her “stage of sensual development” to the “sensation of reaching into a cold, wet pile [of livers], groping through the organs, feeling the heft of each liver in my open palm.” Nothing is off-limits to Ms. Cole, be it livers or lust.

Personalizing the devices of humor and criticism, Ms. Cole seems to tweak them, a talent akin to a poet mastering off-meter rhymes. Her “learned selfishness,” for instance, is not quite an oxymoron, yet it probably has more power than a direct one like “bittersweet.” Overstatement, an easy and frequent ploy in satire, is common in Another Bad Dog Book. Consider the description of an old television show, Ms. Cole writes of “four thirty-something gay friends in Pittsburg who have sex with their partners and total strangers about ninety times a day.”

Joni Cole’s voice may be brutal, but readers, drawn to turn to the next page, will be rewarded: She is funny—and so is her gutsy book.