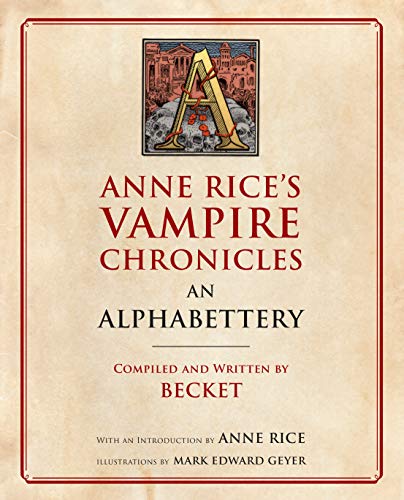 “For the dedicated Anne Rice/Lestat fan as well as the newcomer just discovering the series, this soft-cover volume is a must.”

For those who may find themselves overwhelmed by the many characters appearing in The Vampire Chronicles series, here is the ultimate answer.

Compiled by a long-time reader and fan of the series, this Alphabettery encompasses all the characters in the novels from A (Aaron Lightner) to Z (Zenobia).

Each character’s origin, first appearance in a story, and his/her relationship to Lestat and others in the series is also detailed, with cross-referencing after each explanation, as in:

The Vampire Chronicles is also listed, with a complete bibliography.

With a full color title page, there are approximately 513 entries, as well as a list of acknowledgements and an index. Each entry has the name in Old English lettering.

For the dedicated Anne Rice/Lestat fan as well as the newcomer just discovering the series, this soft-cover volume is a must, and will be a compilation to be treasured.