Anna of Kleve, The Princess in the Portrait: A Novel (Six Tudor Queens) 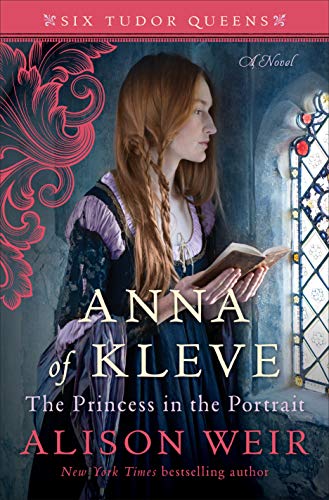 “Weir’s presentation of Anna is interesting, intense, filled with myriad crises, and a fast read.”

One of the strongest tools an author has when writing creative nonfiction is literary license, and Alison Weir, in her new book Anna of Kleve, The Princess in the Portrait, uses that tool to its fullest advantage.

In this fourth book in her series on the six wives of Henry VIII, she uses literary license right from the beginning when she introduces the reader to Anna of Kleve as a young teenager on the brink of womanhood who is seduced by her cousin, Otho von Wylich.

Although she knows this behavior on the part of both parties is wrong, she has fallen hopelessly in love with Otho even though she is betrothed to another.

After Otho departs, she discovers to her horror that she is pregnant. Literary license at its best, because this relationship comes into play again later in the book as partial explanation of the real accusations made about Anna of Kleve and if she were pregnant by the king long after their divorce.

Anna is scuttled off to a location distant from her house for “health” reasons where she has a healthy baby boy and gives him up to a common family to be raised. She is bereft at this situation but knows there is no other solution.

Anna returns home, where only her mother and her nurse, Mother Lowe, know her true health issues.

Several years pass, and Anna’s father, the leader in Kleve, dies, and her brother, Wilhelm becomes duke and assumes the leadership role. Anna’s betrothal dissolves, and she soon finds herself under the eye of King Henry VIII of England, whose wife Jane Seymour died in childbirth. Henry is looking for another young woman who can continue the Tudor line.

Discussions occur, and Henry’s interest is piqued. But he does not want a pig in a poke, so he sends his best artist to visit Kleve and produce pictures of Anna and her sister Emily. The king will have his pick.

Henry is encouraged by the portrait, and arrangements are made to bring Anna to England to become Henry’s fourth wife. As history would have it, Henry was greatly disappointed in her appearance when he finally met her face to face, but here again, literary license entertains us. A member of the party that travels to England with Anna and sees to her safety is Otho von Wylich, and Anna is still in love. He has, by this time, married and for all intents and purposes seems to be happy with his wife.

Although Anna and Henry marry, it is apparent to Anna that Henry is not satisfied with her. Their marriage is not consummated, and Anna is never crowned as queen, in spite of the marriage. As the weeks continue, Henry spends time with Anna and seems to enjoy her company, and yet still he will not consummate the marriage.

Henry is looking for a reason to divorce Anna, and his advisors determine that her betrothal of many years earlier, was never properly dissolved, and as a result, Anna remains promised to another man. The king sees this as a ripe opportunity, and by this time he has fallen in love with another: Katherine Howard.

Anna is in a constant state of worry. “The repeated resurrection of the tiresome matter of the precontract, her unconsummated marriage, her deferred coronation, not to mention the forces that might be working against her at court, and her inability to read the King’s mind, were making her feel very vulnerable.”

Knowing how Henry’s previous wives have fared in their various circumstances, and sensing a growing desire for her own independence, Anna agrees to the divorce. After only a short ride as queen, and although their marriage is doomed, Anna and Henry establish a comfortable friendship. “Freed from the ties that had bound them, it was obvious that they were both realizing how much they really liked each other.” He refers to her as his “sister” and in spite of the situation, she will defend him at all times.

With the termination of her marriage, Anna finds herself granted properties, jewels, a household full of servants, and an annual income befitting a queen. Although her place at court is on an as-invited basis, Anna revels in her privacy. Much to her delight, Otho von Wylich is placed in her household. His marriage is failing—a situation that pleases both Otho and Anna—and they reestablish their previous relationship. It is now that Anna tells Otho about their son (Johann) and his whereabouts, and plans are made to bring him into her court. They know they cannot reveal their parentage to him, but having him close at hand is enough.

When Katherine Howard, the new queen, makes the mistake of having an affair outside of her marriage, she faces the ax, and King Henry is once again without a wife. He frequently visits with Anna, and rumors abound about the possibility of her remarrying the king.

Her ongoing affair with Otho results in another pregnancy—more literary license to be sure—and although she goes into seclusion and gives birth to a female, the child dies. Anna returns to her own homes, only to find that the rumors of remarriage have gone beyond just that, to include rumors that she is pregnant with the king’s son. Confronted by the king’s representatives, Anna denies the accusation, and the story is quickly put away.

Weir has a number of side stories that she weaves throughout the book, again using literary license to embellish Anna’s story as well as to make for a good read. One of those stories is about Thomas Cawader, an arrogant young man assigned to maintain Bletchingly, one of Anna’s homes. He is in and out of trouble with the king, Anna, and Mary I, and one wonders at the validity of his role during this time. Regardless, the many scenes in which he appears are tense and filled with intrigue; they add to the story.

Anna lives through the death of King Henry, Kind Edward VI, and Lady Jane Grey, and she sees Queen Mary ascend to the throne.

While there are a number of intrigues written about life in and out of Henry VIII’s court and his various wives, this one is most interestingly presented. Of his six wives, Anna of Kleve is probably the one least discussed, least known about. Yet she remained the one who survived the others and all things considered, seemed to have the king’s attention and favor more than the others.

Throughout the story Weir details the relationships between Anna and Henry’s daughters, Mary and Elizabeth, while not much attention is paid to her relationship with Henry’s son, Edward.

Weir’s presentation of Anna is interesting, intense, filled with myriad crises, and a fast read.