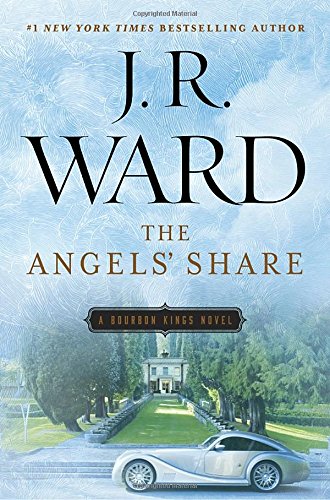 “This is about survival! You think I want to do this?”

J. R. Ward’s Baldwine family has come roaring back in The Angels’ Share, the second book of her Bourbon Kings series. Following the suspicious death of the family patriarch, William Baldwine in The Bourbon Kings, the family fortune is in more trouble than it seemed to be at the end of the first novel. Youngest son Lane is in the unenviable position of trying to save Bradford Bourbon Company and the family estate when what he really wants to do is to run away with his gardener/lover, Lizzy.

The Carringtons and Ewings of the ’80s powerhouse television series have nothing on the Baldwine family. Ward has packed this novel to bursting with intrigues, infidelity, torture, and murder, along with a healthy dose of tangled love stories. Oldest son Edward has checked out of the family after the betrayal he suffered at the hands of his father—one evil, evil man. Middle son Maxwell has been missing for three years; he makes an interesting return, “scruffy and battered.” Youngest sister Gin is moving forward with her plan to marry a man perhaps more evil than her father.

Though the PR for this book touts Edward as the central protagonist, the story actually revolves again around Lane and his increasingly desperate attempts to suss out the extent of his father’s embezzlement from Lane’s mother’s birthright company. Ward allows her character to evolve believably from a spoiled, card shark playboy to a man determined to keep his family together and solvent. Each revelation of his father’s infamy hits him like a physical blow: “You look a decade older,” Maxwell informs Lane, and no wonder: he’s trying to track down a missing nearly two-hundred million dollars, find out who killed his father, and hold together a family in rags. Oh, and he’s also in love.

Ward demonstrates her range in The Angels’ Share; this series has a very different focus than her Black Dagger Brotherhood series, and sex isn’t a primary driver for any character/story arc. In fact, the romance, though sweet, is almost an afterthought. This novel is a throwback to the big business, big money stories of Harold Robbins or Jackie Collins, a southern-fried Lifestyles of the Rich and Famous. Ward immerses the reader in big characters, far-reaching story lines, and funny, realistic dialogue:

“My father’s seventy-five million dollar key man term life insurance policy through Mass Mutual. Turns out he stopped paying the premiums so it woke up dead.”

“Okay. Good to know. You know most people would merely throw the thing out. Just sayin’.”

“Yeah, but this was so much more satisfying, and I’ve about had it with bad news. So you wanted to tell me something?”

“You got any more bullets in that thing?”

Even more impressive are the myriad characters Ward has created in this series, each with their own voices and twisty, turny personal issues. Lizzy, as Lane’s love interest, is probably the flattest character; in this book, she seems to exist only to love Lane. The rest of the people of this book are fascinatingly well-rounded.

Gin is a pistol of a character, aggravatingly arrogant, but with a core of vulnerability. Her relationships with both her new husband and long-term lover Samuel T. are involving and exciting. Edward is similarly interesting, but tragic. They pose an interesting juxtaposition of self-interest and familial loyalty, characteristics that drive this story. Family is, “. . . shelter that has no roof, and sustenance that has no weight, and air that didn’t need lungs for breathing,” Lane discovers, and yes, he does ultimately want to “do this.”

This novel, even more than The Bourbon Kings, sets this series up as a long-term contender. For every mystery that is solved and secret that is revealed, there is a tantalizing storyline introduced or question left unsolved. Waiting another year to see if Mack’s new assistant is what she seems to be, whether Lane will be able to recover any of the embezzled funds, or if Samuel T. will be calling Gin’s husband, Richard, to his house to take advantage of the Kentucky homesteader law will be difficult. And what the heck is up with Maxwell?

Tune in next summer for the next episode of this soapy, funny, entertaining confectionary delight of a series. Until then, settle back with some sweet tea and revel in J. R. Ward’s The Angels’ Share.