This Angel on My Chest (Pitt Drue Heinz Lit Prize) 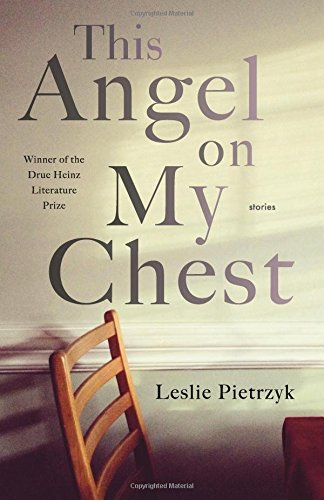 “Angel is remorse, and it is redemption. It is (highest compliment) craft.”

Full disclosure: I met Leslie Pietrzyk nearly 20 years ago at one of the few writing conferences I’ve ever attended. (I went with my husband and young son in tow; hardly the ordinary workshop experience). We wrote letters, we slipped away, we lost sight, we reconnected because isn’t that the good of social media?

I knew the bare outlines of the book that Pietrzyk (the author of two earlier novels) was writing—a series of interlocking stories inspired by (but never quite mirroring) the death of her first husband, who died at the age of 37. I knew her to be precise, fiercely knowing, disinterested in simple sentimentality. I knew her to be of the opinion that truth is never singular and lies often yield the greater honesty. But I had no idea—none at all—of how ferociously smart This Angel on My Chest, winner of the 2015 Drue Heinz Literature Prize, would be until I sat down this very morning and read it, cover to cover.

I had no idea I’d be so spellbound.

This is one hell of a book.

In 2010, Jake Silverstein, then the editor of Texas Monthly and now the editor of the New York Times Magazine, wrote a book called Nothing Happened and Then It Did: A Chronicle in Fact and Fiction. Some of the stories in the book were true. Some were not. The decoding was left to the reader. I mention this because Angel could have left its reader in a similar state of philosophical quandary. An intellectual maybe this or possibly that. Angel could have done that, but it does not, because the facts don’t matter here unless your interest lies in gossip. The emotions do. And I believed every single sentence of Pietrzyk’s hurt, abraded yearning.

In Angel you meet the widow who waits for the ghost of her husband, the widow who may have hated her husband, the grieving girlfriend who isn’t technically a widow, widow as slut, widow as liar, widowy grief that erupts from widowy anger. There are stories told as lessons in craft. Stories told as quizzes. Stories that insist that it doesn’t matter how it (whatever it was, they were) happened; it matters that it (they) did. You have room to lie. You don’t want to lie.

“When someone is dead, your memory becomes both sharper and foggier, and what you don’t remember, you feel as though you have permission to make up. You realize that when you want the true story, you’re going to make it up because he’s not there to stop you. That’s sad.”

What are you supposed to do with the cataclysmic end? What are you supposed to make of the many people you were inside the marriage that you had? Write a memoir (write it well), and you are bound to tell a progressing truth. Write stories, nudge them together, mix the facts with the fictions, and you conclude (as your readers conclude) that there are other ways to bleed the truth.

Let’s not call Pietrzyk brave. Let’s call her bold. Let’s call her a Writer, capital W, who has stepped into treacherous territory and made things up to tell a kind of searing truth. Angel is remorse, and it is redemption. It is (highest compliment) craft.