The Angel of Losses 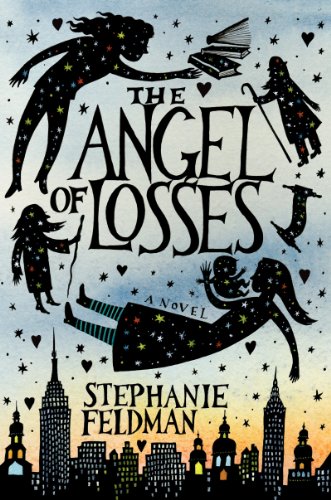 “The Angel of Losses is recommended to nerdy (in the best sense of the word) secular Jewish and philo-Semitic readers whose genre interests include the confluence of contemporary and fantasy fiction.”

In 1997 at age 60 Secretary of State Madeleine Albright, who had been raised Roman Catholic and became Episcopalian at the time of her marriage, learned that her parents were born Jewish and that three of her four grandparents were murdered in the Holocaust. In Stephanie Feldman’s debut novel The Angel of Losses her protagonist Marjorie Burke makes a similar discovery while packing up her recently deceased Russian immigrant paternal grandfather Eli’s belongings.

When they were growing up in suburban New Jersey Marjorie and her younger sister Holly had no idea that they had Jewish ancestry, though their grandfather’s name is certainly a clue; Russian gentile parents rarely give their children Old Testament names. Nonetheless, Holly became Chava when she converted to Orthodox Judaism in college and married Nathan, a scholarly member of the Berukhim Penitents, a mystical separatist Orthodox sect that had established a presence in the Burke’s hometown; and Marjorie chose the theme of the wandering jew as the topic of her doctoral dissertation in comparative literature.

Chava and Nathan are expecting their first child and had moved into the house in which she and Marjorie grew up. Nathan wants no secular books in the house, and so Chava and Marjorie are packing books in the basement when Marjorie discovers the first of four notebooks in which Eli has written stories about The White Rebbe, an itinerant rabbi and wonder maker.

The other three notebooks eventually show up and play the role of narrative texts within the novel in the manner of Nicole Krauss’ novel The History of Love, while the combination of folklore and mysticism in the White Rebbe stories is reminiscent of Isaac Bashevis Singer.

The stories’ mystical mythology can be intimidating, but Marjorie finds assistance while conducting research at Columbia University’s Butler Library (which Feldman, a Barnard College alumna, describes accurately) where she meets Simon, an academic librarian whose research topic, myths about the ten lost tribes of Israel, is related to her own, and they become romantic as well as research partners.

The White Rebbe’s power comes from the Sabbath Light, the name of the 22-letter Hebrew alphabet’s 23rd letter that completes the 70-letter name of God (that will be revealed when the messiah comes). The Sabbath Light is guarded by Yode’a (Hebrew for knows), the Angel of Losses, who is a river of stones (think of a perpetual horizontal avalanche) beyond which is the land of the ten lost tribes who took the letter with them into exile.

Like Marcus, Feldman takes elements of Jewish mysticism and spins a mythology of her own invention. Readers who find the above mythology synopsis more confusing than elucidating should probably skip The Angel of Losses, which could well become a nerdy cult classic, while for those who comprehend and are comfortable with the mythology the novel is an enjoyable page turner, and Marjorie is a likeable protagonist about whom they may find themselves caring.

That mythology comes to life in the form of an elderly man with the White Rebbe’s phosphorescent light blue eyes who knew Eli and stalks Marjorie. The mythological magic becomes potentially life saving when Chava and Nathan’s infant develops a serious illness, Nathan disappears, and Nathan and Marjorie become rival contestants trying to acquire the Sabbath Light.

That a gentile like Marjorie who is not grounded in Jewish ethics can potentially possess and employ the Sabbath Light is a plot element that ironically reflects a secular universalist worldview as well as the current demographic reality that a growing number of Americans with Jewish surnames are not halakhically Jewish, but some of them are nonetheless proud of, curious about, and/or feel some connection to their Jewish ancestry, and some may have to deal with the same psychological issues as other children and grandchildren of Holocaust survivors. Marjorie’s Christian upbringing is evident, however, when she refers to the messiah’s second coming.

Feldman’s prose is intelligent, engaging, and at times figurative as when she says of Nathan, “He was burning into bronze in the fire of his own single-mindedness.” The 21st century primary narrative and the White Rebbe stories each have their own appropriate narrative styles, and Feldman’s command of both demonstrates a versatile virtuosity impressive for a debut work.

The Angel of Losses is recommended to nerdy (in the best sense of the word) secular Jewish and philo-Semitic readers whose genre interests include the confluence of contemporary and fantasy fiction.