The Angel of History: A Novel 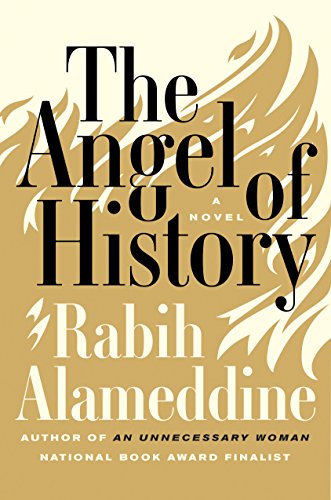 The Angel of History is an intricately woven novel, centering around Jacob, a poet-in-crisis, about to check himself into a mental institution. Told through Jacob’s inner monologues and interviews held by Satan, the novel forces Jacob to confront his tormented past.

Born out of wedlock to a Lebanese father and a Yemeni mother, Jacob finds himself exiled to the outside world while still in the womb. Jacob’s exile leads him and his mother to a brothel in Cairo. Raised by prostitutes, Jacob experiences a tenuous sense of belonging for the first time in his life. This belonging, however, only exists within the confines of the brothel.

Growing up in a Muslim country, outside the walls of his home Jacob is an outcast once more. The alienation and isolation that Jacob is enmeshed in during his childhood hold power over the rest of his life. The novel draws the majority of its strength from these themes of exile and isolation, thus allowing the reader to form an intriguing kinship with Jacob.

Years later, Jacob is “rescued” from the brothel by the father that he never met. Immediately placed into a French Catholic school, Jacob is cut off from his mother, father, and the prostitutes he had come to view as family.

At school, Jacob is unable to find acceptance and companionship among his peers. He is ostracized by his classmates for his homosexual tendencies, which are a source of fear and confusion for him. Likewise, he is viewed as sinful by the Catholic nuns because of his Muslim background. Caught between the apexes of two belief systems and histories, Jacob’s crisis of identity begins to take form.

Jacob is able to find a sense of acceptance again when he moves to San Francisco and meets his gay lover, Doc. But even this is taken away from him when he loses Doc and all of their friends to the AIDS epidemic in the United States. Unable to fathom why he is the one to survive everyone he loves, Jacob tries to free himself of his pain, first through sadomasochistic adventures and then through the simple act of forgetting. As Jacob rids himself of his memories, he becomes unable to write any more poetry.

His inability to create his art causes Satan to intervene in his life. Satan repeatedly tries to make Jacob remember and confront his past by frequently appearing and talking with Jacob. Worried that he is finally losing his grip on his sanity, Jacob decides to check himself into a mental institution.

Satan, however, is very much opposed to this idea. So much so that in an effort to remind Jacob of who he is, Satan interviews Death and the 14 saints that have been an integral part of Jacob’s life. Thus the novel traverses between the past and the present; creating a non-linear narrative. This narrative style proves engaging as it unveils the mystery shrouding Jacob’s life bit by bit.

The fragmented narrative serves as a hook that draws the reader further in. As Jacob’s recollections become demystified, so do the beauty and horrors of his world. Despite how captivating these Proustian revelations are, the exchange between the present and the past can occasionally appear as messy and confused. This can cause the reader to feel as though she isn’t as grounded in the narrative as she should be, in much the same way that Jacob no longer feels grounded in his own reality.

The narrative style employed in The Angel of History is made more powerful through the poetic language that Rabih Alameddine uses. The language has a visceral edge to it. Descriptions and narrative are never weighed down by concrete clichés. Rather, they are laden with meaning, symbolism and nostalgia.

The beauty and originality of the language stand in striking juxtaposition with the violence of the events that unfold in the novel. Scenes like the one of Jacob being whipped into submission or the story of the Arab in a cage would have come off as too raw and exposed, even offensive, if any other narrative style had been used. It is the balance of beauty and brutality that allow for such moments to be not only believable but integral to Jacob’s story.

A certain suspension of disbelief is necessary when reading The Angel of History. As the past and present blend together, so do reality and the supernatural. The reader can never be entirely certain that the appearances made by Satan, Death, and the 14 saints aren’t figments of Jacob’s imagination as a result of his psychotic break. But as the reader is only allowed to view the novel from Jacobs’s and Satan’s perspectives, she is forced to accept that these characters exist, at least within the confines of Jacob’s mind.

Accepting the existence of characters such as the Devil and Death become easier as they shed the clichéd characteristics that they’ve been imbued with throughout countless myths and works. Instead these characters are bestowed with new attributes that turn them into individuals.

The Devil, for example, is frequently portrayed as a sassy, sarcastic person, reminiscent of the Devil in Mikhail Bulgakov’s Master and Margarita. Death, on the other hand, is portrayed as a stiff and compassionate individual, at least in his own way. Such distinctions increase the blur between reality and fantasy, both for Jacob and the reader.

The Angel of History effectively tackles myriad themes pertinent to the day and age that we live in. Alienation, belonging, identity as an Arab, a gay man and a poet, religious conflicts and conflicts of faith . . . The novel is strong enough to bring each and every one of these themes to the forefront. This allows for a full exploration of the poet’s troubled soul and deepens the kinship between Jacob and the reader and, even, Satan and the reader. In a way the novel becomes an attempt to “resurrect” Jacob. It is as Satan says:

“A poet is tormented by the horrors of the world, as well as its beauty, but he can be refreshed, reborn even; he can take to the sky once more. Think phoenix, not Icarus.”