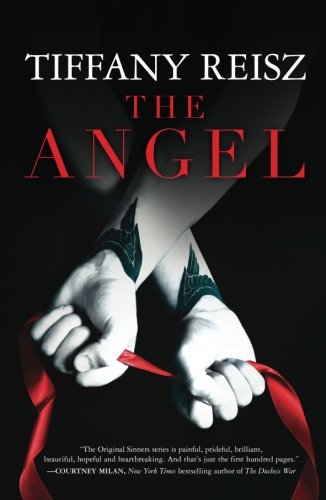 “The tenderness with which Ms. Reisz writes the love story that develops between these two men belies genre and stereotype. . . . This is not your mother’s Harlequin romance.”

With a closing sentence that is laugh-out-loud funny, Tiffany Reisz continues to surprise with The Angel, the second book in The Original Sinners series.

The novel opens with a tender scene between Nora and Søren, a rare glimpse of their absolute ease with one another. Their tranquility is shattered by the sudden prospect of Søren’s promotion to bishop, and the arrival of an investigative reporter tipped off to a potential conflict of interest.

At 17, Michael is suffering the consequences of his family’s disapproval, and Søren and Nora know this might be their last opportunity to help him learn the lifestyle that could ease his suffering.

“Angel” is Nora’s name for sweet yet desperate Michael, who fantasizes about the famous author but falls hard for Griffin’s irresistible charm. Griffin is equally captivated by the beautiful, damaged young man, but standing between them is Søren’s order that Griffin keep his hands off the boy.

The tenderness with which Ms. Reisz writes the love story that develops between these two men belies genre and stereotype. Love is universal, and author Reisz reminds us that acceptance should be, too.

As Nora’s mother entreats her to consider giving up Søren for the vanilla love offered by Wesley, she asks “Can you just try to love someone or even let someone love you who doesn’t want to hurt you? Is that too much to ask?”

When Nora and Søren reunite after the investigation ends, Søren risks his own heart by pushing her to acknowledge her unresolved feelings for Wesley. Infusing the darkness of Søren’s obvious pain with the bright light of his overwhelming love for Nora, the story closes with a delightful line.