Andy: The Life and Times of Andy Warhol: A Factual Fairytale (Art Masters) 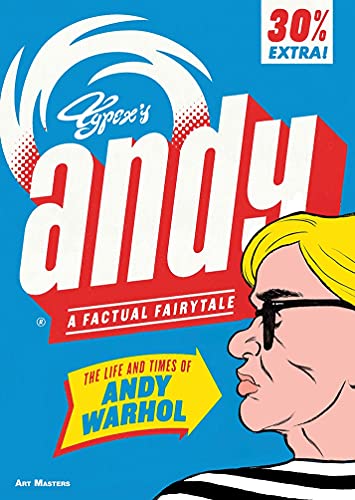 “How did a sickly kid from a poor family in Pittsburgh become Andy Warhol, the cultural superstar?”

The largest museum in the United States dedicated to just one artist is the Andy Warhol Museum in Pittsburgh, where he was born into an immigrant family from Slovakia on August 6, 1928. Born Andrew Warhola, he later changed it to Andy Warhol. This blockbuster graphic biography of 568 pages and weighing over three pounds, tells the remarkable story of this iconic pop artist.

The book's silver edge-stained pages are reminiscent of Warhol's famous foil-and-silver-paint-lined studio. This work is a monumental attempt to catch the personalities of over one hundred people whose lives became entwined with his. It does not try to evaluate his work or its effect on American society. The author, Typex, shows that his life is so bound up with his art that one cannot separate the two.

How did a sickly kid from a poor family in Pittsburgh become Andy Warhol, the cultural superstar? Warhol, a leading figure in the visual art movement known as Pop Art, was inspired by popular culture depicting everyday objects, advertising, and comic books. Pop art emphasizes the kitschy elements of modern culture. Known as the "King of Pop Art," he started out as a commercial artist who branched into painting, silk screen, photography, film, and sculpture. He's especially famous for his silk screen depiction of Campbell's soup cans and the Marilyn Monroe Triptych.

Warhol lived openly as a gay man. His life was both glamorous and troubled. He developed an illness in childhood called Chorea, historically known as St. Vitus Dance, which is characterized by involuntary jerking movements of the face, hands, and feet. Poor Andy would suddenly start dancing, and the kids at school laughed at him. Andy, while dancing: "Lots of folk I see each day, think I lead a life so gay. The reason why I shake this way, it's just the Saint Vitus dance."

Warhol attended art school in Pittsburgh and started drawing ordinary objects such as women's shoes for women's magazines. At first his art was scoffed at when he tried to sell it to a gallery. The gallery owner told him: "It's comics, advertisement, mass production . . . no comment, no expression, just that . . . this is our culture. This is nothing, I see nothing. It's emptiness, commercial nothingness. Take it away."

This work reads chronologically as a series of comic books, divided into ten parts. Each part is color-coded to depict a different emotion. Blue pages denote a sad period; red, a violent period; and gray-black, the approach of death.  Each part is introduced with a dozen small profile cards of celebrities in Andy's life, such as Bob Dylan, Paul Morrissey, Frank Zappa, and David Bowie. (The cards can be cut out as collectibles.)

Andy named his New York Studio "The Factory." It eventually became a magnet for celebrities, Bohemians, musicians, and assorted off-beat characters. He surrounded himself with gay men, lesbians, poverty-stricken people, and psychiatric cases. Andy to one of his staff members: "I only want outrageous people around me, Ivan, all of the time. Let them do what they do, talk their talk of whatever comes into their mind and film that."

The book's cartoon characters often resemble caricatures: some show thin, ugly faces and sexually-explicit activities. For example, men having sex with other men, and a woman peeing in the street. Foul language is abundant: an older boy is chastising Andy: "You can just suck my dick, you Goddamn motherfuckin' faggot." Other pages show naked boys comparing the length of their privates.

But the most riveting chapter is Part 6, "The End, 1968" on red pages, describing Andy's encounter with Valerie Solaris, a man-hating feminist, who, on June 3, 1968, shot him at point-blank range in The Factory because he had misplaced her manuscript, titled: Up Your Ass. "To be male is to be deficient, emotionally limited; maleness is a deficiency disease . . . The Y (male) gene is an incomplete X (female) gene . . . in other words, the male is an incomplete female." (an extract from the Scum Manifesto, which she had authored). Solaris also founded SCUM, Society for Cutting Up Men, of which she was the sole member. She had concluded that Andy and her publisher, Maurice Girodias, had stolen her manuscripts.

The foreshadowing of this event is very effective. Ondine, one of Warhol's friends, says to Andy: "Warhol, do you mind if I shoot some pictures? Andy: "Eh . . . eh . . . go ahead." Ondine pulls out a gun from her purse and shoots five pictures of Marilyn Monroe. A friend in his studio thought it was merely a matter of expression. But Andy decided that it was a unique series and to "rename them 'shot Marilyn #1-5' and they'll be worth ten times more."

In childhood, Solaris had been sexually abused by her father and emotionally abused by her mother. Eventually, she turned herself in to the police. She was diagnosed as a paranoid schizophrenic. She spent several years in jail. After her release, she died in 1988 of pneumonia.

Valerie's gunshots pierced Andy's stomach, liver, spleen, esophagus, and both lungs. He was unconscious when the ambulance arrived and came near death. Despite several surgeries, he was never the same man again. He wore a corset for the rest of his life and became melancholic and physically weak.

However, his notoriety attracted celebrities from all over the world seeking to be interviewed in his new magazine. The parties at The Factory lifted his spirits for a time. Eventually he became weaker and died of arrythmia on February 22, 1987, at the age of 58.

This massive book is, by itself, an art object. It's the graphic masterpiece of Typex (pseudonym of Raymond Koot, a well-known Dutch comics illustrator, specializing in character depiction and cartoon illustration). It also gives a comprehensive overview of Pop art in the 20th century. This laudable work deserves a place on the shelves of those who admire contemporary American art and especially Pop Art.