And There Was Light: The Extraordinary Memoir of a Blind Hero of the French Resistance in World War II 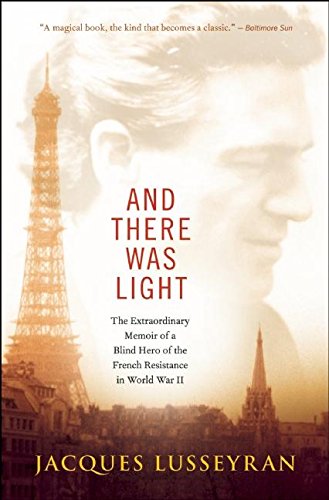 “As a leader of the resistance, Lusseyran allocates his powerful intellect and considerable courage to defend his beloved France against Nazi tyranny. This striking portrayal of bravery is poignant and touching.”

“Light is in us, even if we have no eyes,” wrote Jacque Lusseyran, a French underground resistance leader during World War II. His breathtaking memoir And There Was Light reveals Lusseyran’s intense love of life and his courageous defense of France against Nazi Germany. Later, he has to survive brutality, sickness, and starvation at the Nazi concentration camp, Buchenwald.

In a school accident at the age of eight, Lusseyran becomes totally blind. Yet he continues to experience an otherwise normal childhood with many close friends. In the months following his accident, Lusseyran makes the astounding discovery of a “rainbow-filled world within.”

Despite his challenge, he is able to focus his remaining senses upon the world and people surrounding him with amazing results. He reads braille vociferously and gains admission to the finest schools in France. With his best friend Jean, Lusseyran immerses himself in life, friendships, learning, and social causes. He is soon respected by everyone for his intellect, his amity, and his unerring capacity to understand other people.

Lusseyran delivers a powerful description of the wonderful beauty of life and also its consummate evil, packaged together into a fast-paced expose of his youth. Though blind, he can “see” people and events with distinctive detail. Though imprisoned, his soul soars with courage. His friends defend him unquestioningly, and his love for France never falters.

Lusseyran’s bravery inspires others to follow his example, even when captured by Nazis and sent to Buchenwald. He is a natural leader without a trace of ego. He desires nothing for himself but to free France from Nazi occupation.

After experiencing permanent blindness, Lusseyran could have reverted to a peaceful, quiet life in his home or at an institution. Instead, he quickly learns how to overcome his blindness as he soldiers on into adolescence. As a young adult, he becomes immensely popular and is trusted by all. His burning need to save France stands as an illustration for many others.

Leading by example, Lusseyran pulls a large group of resistance fighters together. He has an uncanny ability to “read” others by their vocal patterns, weeding out those who are insincere and those who serve the Gestapo and the SS. His resistance fighters soon number in the hundreds and they eventually merge with another resistance group.

Eventually, in 1943 Lusseyran and several other leaders are betrayed to the Germans. Interrogated extensively by the Gestapo, Lusseyran soon finds himself starving to death at Buchenwald. His survival there is nothing less than a miracle. Of more than 2,000 resistance fighters imprisoned, Lusseyran is one of 30 to survive the war.

Told in first person, this book is a powerful and evocative testimony of one disabled child’s power to change the world. Well written and well edited, the book includes pictures relevant to events in Nazi-occupied France that were unseen by this reviewer.

Not since Helen Keller has a blind person done more to save people and enrich their lives. As a leader of the resistance, Lusseyran allocates his powerful intellect and considerable courage to defend his beloved France against Nazi tyranny. This striking portrayal of bravery is poignant and touching. It is a salient and tender examination of the courage and fortitude exhibited by the resistance and imprisoned Frenchmen.