And Then They Were Doomed: A Little Library Mystery 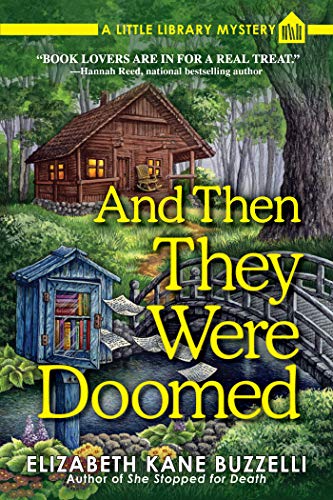 “Buzzelli presents a good story with lots of twists and turns but enough clues to keep the reader turning the page to meet the next part of the conundrum.”

For people who enjoy Agatha Christie, Elizabeth Kane Buzzelli’s new book, And Then They Were Doomed will find interesting comparisons with two of Christie’s masterpieces: And Then There Were None and Murder on the Orient Express.

Buzellil’s protagonist, Zoe Zola, is unique and colorful. She is a dwarf, and she doesn’t care what people think of her. She is an Agatha Christie expert who looks at Christie through her characters. And that’s what the story is all about: Christie’s characters.

Zoe thinks a lot about her own history: her mother, unwed and pregnant; her father disappearing because he does not want to deal with a child; and she, born as a dwarf, has had to contend with unkindness, especially from her family.

She receives a letter, the envelope framed in black as one would receive a death notice, but she discovers it is an invitation to a video conference with several Christie experts who will spend a week in a remote location in Michigan’s Upper Peninsula, discussing the pros and cons of Christie’s life and her writing.

Something tells her not to go, and yet she is convinced this is more about her than it is about Christie. She is the last in her immediate family; her father gone, her mother driven to her death by unforgiving relatives, and now—is it her turn?

She learns that 10 others have been invited, and she immediately sees a relationship to Christie’s novel And Then There Were None. Her next-door neighbor, Jenny, is going to visit her sister, Lisa, and they will be close to the Netherworld Lodge, so she agrees to drive Zoe.

As Zoe studies the names and credentials of the other participants, she finds it odd that several of them have the same names as Christie characters; the others she soon discovers are not what or who they seem to be, as their names are puzzles as well.

Here the story veers slightly, as Jenny’s trip to visit her sister includes a meeting with a group of Finnish women who are part of a documentary Lisa is filming. And soon the two stories become entangled. These women are aware of Zoe’s part in the program . . . isn’t that odd, Jenny thinks?

Clues begin to surface from every nook and cranny in both locations. The Netherworld Lodge is not only remote, but the weather does not cooperate, and the rains come in torrents, flooding the only escape route from the lodge.

The program goes on, and suddenly people begin to disappear . . . much like the murders in And Then There Were None. But it’s more than just that, in the back of her mind Zoe also sees similarities with Murder on the Orient Express when the details of a murder of a college student occurring several years before begin to surface.

A discussion rises about Christie’s two stories: Was the murder in the first, committed by one person, any more or less a murder than the one committed in the second by a group? Or can a group really commit a murder? Isn’t it still a one-person murder, the rest just accomplices? Indeed, there is more muddy water in this plot than just around the flooded lodge!

Buzzelli presents a good story with lots of twists and turns, but enough clues to keep the reader turning the page to meet the next part of the conundrum.

The most challenging part to the story is keeping all the characters straight in one’s mind. In order to make the comparisons with Christie’s stories, Buzzelli needed to have 10 characters and 10 names at the lodge, as well as additional characters in Jenny’s part of the story in order to tie the two together. If the reader can get through this muddle of characters, they will follow the story to its inevitable, and typical Christie, end.

And Then They Were Doomed is a story with dark implications, and much like Christie’s works, often a dark location that will keep the reader looking over his or her shoulder, just in case!

A good story worth the read over a cup of tea on a rainy night!