And Still I Rise: Black America Since MLK 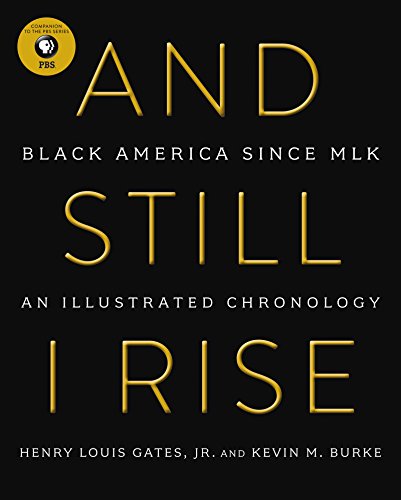 And Still I Rise: Black America Since MLK is a companion to a PBS series of the same name and chronicles the last 50 years of black history and culture in an illustrated timeline featuring over 350 images.

This chronology begins in 1965, with the march to Montgomery depicted in the recent film Selma, and comes full circle to the 50th anniversary, with a quote from President Obama’s speech; “Fifty years from Bloody Sunday, our march us not yet finished, but we’re getting closer.”

How far America has really come in terms of race relations is of course a pertinent and controversial question. As violence persists and the deaths of young black men continue to cause anger and unrest across America, the issues and debates covered in this history are as relevant as ever.

The introduction to And Still I Rise: Black America Since MLK sets out the state of race equality in America in 2015 pretty starkly. While the black population has almost doubled from 22 million in 1970 to 42 million in 2015, there is still disproportionately high childhood poverty and unemployment. Black Americans constitute a third of the prison population yet only make up thirteen percent of the total population of the US. Under the government of the first black president, America has seen some of the worst racial tensions of recent years.

The content of the book documents the rise of “black” culture in mainstream America, celebrating the great progress and achievements since the 1960s. The authors start off by asking what binds African Americans together and should we even be referring to a unified social or cultural entity in this era? While the book doesn’t attempt to answer this question or offer any predications or solutions to the current crisis, it is carefully curated depiction of the journey that has been made.

For those with an existing knowledge and interest in the subject, the chronical structure can be challenging as a list of dates and events doesn’t give scope for deep analysis. Having a long held interest in many of the figures depicted in these pages, this reviewer would have found an essay structure more engaging. However, the timeline aspect does highlight the great speed of change, giving more of an insight into how it would have felt to live through these times.

Take 1965 for example; on February 21st Malcolm X is shot dead, on 7th March protesters are clubbed and teargasses on their way to Montgomery on the day dubbed ‘Bloody Sunday’ and on 25th March Martin Luther King addresses thousands on the steps of the state capitol. On June 4th President Johnson calls for affirmative action at Howard University, and on August 6th he signs the Voting Rights Act with Martin Luther King looking on. The Watts Riots would follow five days later.

This book contains many arresting images, but the problem is that they are too small. In a way, this book would have worked better as a photo history, with fewer words and full page images, as the text isn’t able to engage with its subject in any great detail.

To illustrate the prominence of Motown music in 1966—their artists spend an amazing 30 weeks at the top of the charts over the course of the year—there is a wonderful image of the three Supremes singing on prime time television resplendent in green glittery dresses, their hairdos coiffed to perfection. But the image is tiny, Diana Ross’ face no bigger than a drawing pin. The book features the brilliantly original and confrontational posters of the Blaxploitation films, but again they are too small to enjoy the full effect.

That is not to say that this book has not been put together lovingly, with a view to illustrating as many different aspects of black identity as possible. Although the content accompanying the images is brief, great care and consideration has been taken on the narrative, with illuminating quotes scattered throughout.

On the section marking the bicentenary of American Independence in 1976, Richard Pryor’s Bicentenary N****r is quoted, him referring to “200 years of white folk kicking ass.” It also quotes the more nuanced words of Gil Scott Heron in his track Bicentennial Blues: “From Plymouth Rock to acid-rock/ From 13 states to Watergate/ The blues is grown/ But not the home/ The blues is grown/ But the country has not/ The blues remembers everything the country forgot.”

While the political landscape and the civil rights movement is documented throughout, the authors use other less obvious ways to frame moments in history. 1970 saw the publication of two seminal works of literature, which were both hugely important books in depicting the black female experience; Maya Angelou’s I Know Why the Cages Bird Sings and Toni Morrison’s The Bluest Eye. In this section we are treated to brilliantly succinct and astute quote from Angelou; “The woman is a butt of the nation’s sneer and the black is the butt of the nation’s joke. Black women feel the joke and the sneer.”

The information featured also demonstrates the changing perception of what is acceptable when referring to or depicting black citizens. The book features a quote from Richard Pryor denouncing his previous use of the N-word, and it reports that in 1988 Quaker Oates redesigned their Aunt Jemima mascot to distance her from slavery and removed its “Darkie” toothpaste from the Asian market.

While the content is creative and varied, it would be difficult to recommend this book to somebody very familiar with the territory covered; however, if you are new to the subject, a high school or university student, then this book makes for a perfect overview of modern black America. This would make a fine addition to any school or university library.