Ancient Greeks at War: Warfare in the Classical World from Agamemnon to Alexander 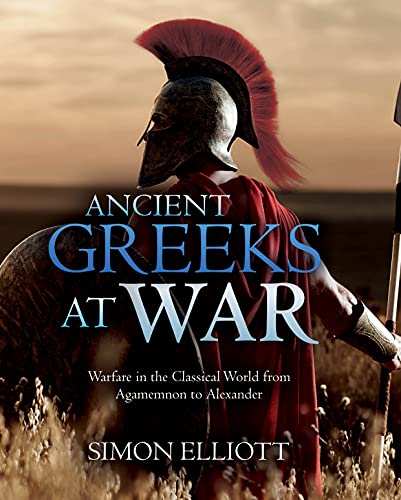 “a well-illustrated book with overview maps to bring to life what could be termed the beginning of the Western way of warfare.”

The armies and battles of ancient Greece continue to be studied today for their timeless lessons in both personal courage and strategic thought. Combining archeology with the latest academic research, this volume provides a comprehensive look at the development of weapons and warfare from the earliest Greek settlers to the conquest of much of the ancient world by Alexander the Great and ending with the conquest of Macedon by the Romans. Simon Elliott provides a holistic look at how Greek armies, in nearly continuous warfare during this period, developed along with changes to Greek civilization, noting how armies became better organized and armed as the first city-states developed, providing the manpower and finances to create large standing armies.

The book has many excellent photographs showing both ancient artifacts and ruins to give the reader a sense of the setting for the military actions that occur as the author takes the reader through the development of the hoplite and phalanx as the primary means of ground combat throughout this era, including the changes to arms and armor, and the subtle but important changes to the basic fighting formations throughout the era of Greek warfare.

As the use of chariots waned and the introduction of cavalry and other specialized troops such as skirmishers, archers, and pikemen created the first instance of what would be called today combined arms warfare, the challenge to generals increased significantly as formations and maneuver became larger and more spread out on the battlefield, making command more challenging as the use of these various troops, particularly infantry and cavalry reserves, required a keen eye and sharp mind in the confusion of melée combat.

Naval combat also played a significant role in this period, in particular where predominant land and sea powers such as Athens and Sparta grappled with producing strategic results during the Peloponnesian Wars or during the numerous wars between the Greek city-states and the Persian Empire. Even the rise of Macedon under Philip II was due in part to naval power. But warfare in ancient and classical Greece was dominated by land battles, and the author provides several vignettes about the most significant battles of Ancient Greece, not only the more well known battles such as Thermopylae and Plataea, but some of the less well-known battles such as Alexander’s first major victory over the Persians at the Granicus River and the Battle of Issus.

Finally, the author extends the history all the way through the four Roman-Macedon Wars that ended with the incorporation of the Kingdom of Macedon as a Roman province around 148 BCE. As the provinces of Greece became embroiled in the civil wars of the late Roman Republic, the last vestiges of Greek power were finally crushed, and Rome became the ruler of the Greek states around 133 BCE.

This is an excellent overview volume covering not only the military, but the political, social, economic, and even cultural factors that led to the rise of the ancient city-states of Greece and their method of warfare that dominated the Eastern Mediterranean for centuries. The author seamlessly brings together not only weapons and tactics, but the political and economic changes that allowed the creation of early professional armies that were equipped with a variety of arms and armor and the phalanx morphed with changes to formations and types of soldiers.

For anyone looking for a starting point before tackling Thucydides or Xenophon, or simply as a reference to ancient Greek warfare this is a well-illustrated book with overview maps to bring to life what could be termed the beginning of the Western way of warfare.