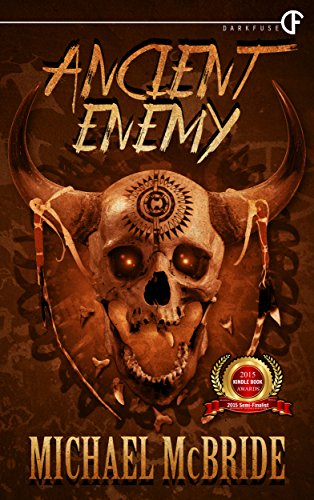 “ . . . a chilling encounter between the past and the present brought to life  . . . in a most entertaining fashion.”

Sani Natonaba is a 17-year-old Ute-Navajo living on the Ute Mountain Reservation in Colorado. His name, given him by his maternal grandfather, means “Leader of the War Against the Old Ones.” Sani doesn’t know it but in the course of one week, he’s going to be given the chance to live up to his name.

It begins one November night when something kills his sheep.

“Whatever had attacked our sheep did so with such speed it overcame them before they could reach the treeline and butchered them in less time than it took me to get there.”

The following night, the thing gets one of their dairy goats and after that starts in on the chickens. Sani suspects a predator, a bear or perhaps a wolf, but the way of the killing as well as its viciousness worries him.

Sabi’s grandfather would’ve call it the work of tchin’dih, an evil spirit and ordinarily Sani would go to him or his own father for help in hunting the beast. His father is gone, however, deserting his family when Sani was a baby and his grandfather is an invalid, stroke-ridden and unable to even speak.

One thing Grandfather can do however, is move his eyes and his continual glances at his possessions sends Sani to an ancient gourd rattle on a shelf in his room. Shaken, the quartz inside the rattle produces light, making Sani remember . . .

“Even with death lurking in this very room . . . his grandfather feared the darkness more.”

The light from the rattle also reveals a secret. An ancient petroglyph with a single figure becomes a rock holding an entire story of an event happening in the Canyon of the Ancients. When the creature attacks again and this time tries to claw its way into the trailer where Sani and his family lives, he knows he has to hunt down the beast.

Barricading the trailer as best he can, he sets out for the Canyon and the fabulous cliff dwellings left by the Anasazi, the powerful warriors who built an almost impregnable fortification, then abandoned it and disappeared. Their largest construct, the House of Many Windows, is an architectural achievement.

Going into the ruins, Sani discovers a story of fear and death inscribed on the walls.

“There was something . . . about a vanished society constructing a sanctuary which was nearly as hard to reach as it was to see . . . with the sole intention of hiding its children from an enemy it feared it could not defeat . . .”

Venturing further into the caves and tunnels, he finds something even more unbelievable . . . more human bodies . . . and figures encased in limestone, preserved forever.

“It wasn’t a statue. It was too perfect. . . . whatever it was had once been a living breathing being before it was bound to the stalagmite. And left to die.”

Forcing himself to continue into the darkness armed only with his rifle and his grandfather’s rattle lighting the way, Sani soon find himself face-to-face with the terrible secret his grandfather knew, the reason his father ran away. He learns a truth about himself as he realizes he had always been bound to what lives in that darkness. Now he understand the meaning of his name, one teenage boy against an Ancient Enemy . . . and his life, if he survives, will be changed forever.

This is a compelling story, filled with fact as well as supposition about the Anasazi, that fierce but mysterious tribe which vanished from the Colorado area never to be heard of again. Told from Sani’s point of view, the language flows poetically, beautiful in description in spite of its gory details. If the reader’s sharp enough, he’ll catch the hints revealing the ending but these are so subtle they may be easily overlooked which makes the final chapter an even more haunting revelation. Intriguing in fact as well as devastating in the implications it brings to Sani’s young life, this is a chilling accounting of an encounter between the past and the present brought to life by author McBride in a most entertaining fashion.