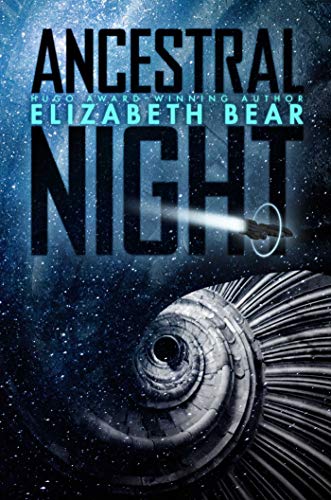 “Readers who enjoy the extensive worldbuilding of epic fantasy and are looking to get into space science fiction might find Ancestral Night the perfect gateway . . .”

Haimey Dz works on a salvage tug, roaming the galaxy and collecting recyclables. Although the machine in her brain (her “fox”) regulates her hormones, anxiety levels, and just about every other aspect that might get her into trouble, Haimey still struggles with the remnants of her past—namely being cast out of the strict mono-gendered lesbian cult into which she was born.

During a routine salvage operate the crew finds technology from a species long thought extinct, and Haimey gets injected with contraband alien DNA that allows her to “see” the physics of space. She doesn’t have a lot of time to explore this gift, however, as space pirates want to get their hands on Haimey for the information locked in her brain—information someone has gone to great lengths to hide.

Haimey must navigate the new alien tech, the pirates, and her own battling subconscious in order to choose the right path forward.

Ancestral Night is two parts hard science and one part space opera, with the elements woven together in segments rather than a cohesive mixture. The book spends a great deal of time on the physics of space travel and alien tech, and occasionally delves into interpersonal relationships.

The book skirts some interesting social questions; however, there’s some confusion as to the role of gender and sexuality in the galaxy, with humans having mostly managed to regulate all of their systems via brain computer, and an assumption of widespread pan sexuality.

As Haimey notes, “It’s kind of horrifying to think of an era when people were so constrained to and by gender, in which the externals you were born with were something you would be stuck with your whole life, could never alter, and it would determine your entire social role and your potential for emotional fulfillment and intellectual achievement. So I wasn’t really reading. I was thinking about social history (I grew up in a human-female isolationist clade, and since I left it’s given me a powerful aversion to species and gender absolutists) . . .”

As well as: “There are more important things to fuss about in space than whether the whatchamallit’s translator system is telling it you’re a them or an it or a whatchamacallit yourself.”

Farweather, the space pirate and major antagonist of the story, sums up Haimey’s cult upbringing against the backdrop of Terran society nicely:

“My people aren’t real comfortable with modifying yourself into a new species, but I have to admit that your people are reactionary even by my standards. A bunch of retro-gendered radically cis-female separatists who brainwash their unmodified, baseline-DNA clone children into absolute obedience and oneness with some primitive group mind? That’s a little fucking perverted.”

Haimey at one time indicates she is an outcast in terms of being only attracted to women, and insinuates that this is not a socially acceptable outcome for a human:

“You could get that fixed. Isn’t it kind of sophipathology to only respond to one gender?”

Little white lies. They get us through.

“. . . When there are literally thousands of options?”

The greatest source of tension in the story comes from the interaction between Haimey and Farweather when the two are marooned on a ship for several weeks. It is in this space that Bear’s writing glows. The chemistry between the two characters is intense, palpable, and absolutely luxurious. The world and character building during their time on the ship is some of the most interesting, and we get a deep look a Haimey’s character and backstory—aspects that are significantly glossed over during the rest of the narrative.

The ending of the story is surprising, with Haimey making a decision that seems counter to the narrative of the book. In the end, the more interesting character, and the one with the most agency, is the space pirate Farweather, who chooses prison over having a computer regulate her mind. The secondary ship characters are barely fleshed out sidekicks despite ample page time, and even Haimey seems to fall flat at the end—a returning servant to her programming.

Although the book contains strong elements of wonder, science, and fascinating alien tech, the text often read long-winded and excessive. Readers who enjoy the extensive worldbuilding of epic fantasy and are looking to get into space science fiction might find Ancestral Night the perfect gateway; however, lovers of space opera will find their expectations not well met.