The Anatomy of Influence: Literature as a Way of Life 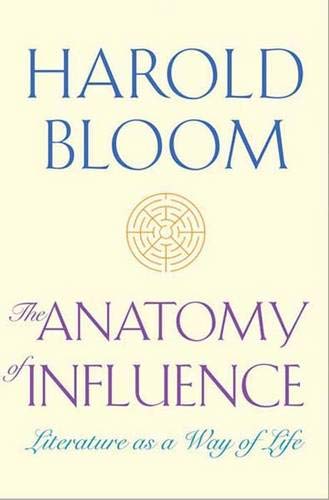 “Anatomy of Influence: Literature as a Way of Life is critical addition to the classic canon of Western literary criticism. Like Dr. Bloom himself, Anatomy is brilliant and full of clarity, honesty, importance, and grace.”

Harold Bloom, the renowned American literary critic, is a prolific writer and a deep thinker. The Anatomy of Influence: Literature as a Way of Life, is his 39th book. Dr. Bloom is a MacArthur Prize Fellow, a member of the Academy of Arts and Letters, and the recipient of many awards and honorary degrees. Currently he is Sterling Professor of the Humanities at Yale University.

Now in his eighties, Dr. Bloom has studied the canon of British and American literature from Romanticism to the present. A child prodigy and an erudite man, he read important writers, especially poets, at ten or twelve; then, at seventeen, he discovered literary criticism in the form of Northrop Frye’s work on Blake. His love of literature, enhanced by his study of criticism, became his life’s passion. Today Dr. Bloom’s work is accepted as a critical part of literary criticism.

The Anatomy of Influence is a tour de force, a masterpiece that can be thought of as a refinement, if not a final summary, of his earlier theories in The Anxiety of Influence, a classic work published 40 years ago.

Although some critics find him controversial, Dr. Bloom holds his personal theories dear; he is not only exceedingly careful to back them up with pertinent examples, but also he presents his proofs in an orderly manner, more or less cementing links into chains of influence.

So it is that The Anatomy of Influence is important to the literary community as it sums up Dr. Bloom’s fresh and possibly final beliefs about poetry. Author Bloom’s aim in The Anatomy, he says, is to write a lighter more readable book, using what he calls “more subtle language that will construe my earlier commentary (The Anxiety) for the general reader and reflect changes in my thinking about influence.”

In The Anatomy he presents new depth and some changes in his new theories, partly because of the shifts in literary criticism over the years and also a “clarity that comes from a long life” like his own.

Dr. Bloom considers the evolution of poetry with the poet’s predecessors in mind. He postulates that no literary work comes upon the literary scene as a newborn—that the poet or writer cannot rightfully claim something new and unique.

He proposes that a poet’s work is not born with a tabla rasa, but is like a child born with an entire family tree inherent in his work. Thus, to Dr. Bloom, the new poet cannot create anything truly original, and he will create, consciously or not, poetry influenced by a “truth,” an image, a rhythm, a structure, or part of an idea that was in a predecessor’s work.

And the same is true of that predecessor and his predecessors, etc. Dr. Bloom believes this is true whether or not the modern poet admits it or even realizes it. The anxiety is there in the poet’s work, if not in his psyche. (Misreadings of Dr. Bloom often assume that the anxiety he finds in his theories exists in the poet himself. Not so, although the poet’s struggle to be original, fresh and highly competitive and shows in his work, it does not necessarily make the poet anxious and troubled. )

Dr. Bloom is less interested in what a poem means than in his view of the modern poet’s struggle to be as good as or better than the long line of famous poets that have come before them. In some of Dr. Bloom’s work, he defines his theory of “Revisionism” as “a later text challenging an earlier text.”

Dr. Bloom’s “super predecessors” are Shakespeare and Whitman. Both precede long chains of poets under their influences. The last half of The Anatomy includes two excellent chapters on Whitman, “Whitman’s Tally” and “Whitman’s Prodigals.” The chapters are rich in examples and will, no doubt, inspire readers to reread many of their favorite poets.

For instance, a fan will find Whitman’s work is enriched after reading Bloom on Whitman’s “prodigals.” Dr. Bloom writes of Whitman’s use of “water edges,” and then goes on to cite Whitman’s influence on more recent poets. A. R. Ammons writes of “dunes:” Both water edges and dunes reform as they shift. But then Dr. Bloom throws in a bit of humor, saying his wife admonishes him for habitually saying, “I’m just oozing along.” Dr. Bloom says that Ammons suggested, in the spirit of the Whiteman’s influence, that Bloom should “drift” than “ooze.”

Yet Shakespeare comes first, and after the commentary on Bloom’s point of view as a critic, the subject changes to Shakespeare with “Shakespeare’s People,” followed by the plays, King Lear, The Tempest, Hamlet, and Shakespeare’s sonnets. Dr. Bloom cites the influence of Shakespeare on Dante, Milton, and Joyce, et al. Here Dr. Bloom’s mastery of detail is astounding, for instance, his scholarship on the individual actors in Shakespeare’s plays. Dr. Bloom describes Armin, a popular actor in Hamlet then, as “ugly but sweet-voiced,” and goes on in considerable fascinating detail about the company’s feuds and grudges.

Dr. Bloom’s long life with literature (acknowledged in the subtitle, Literature as a Way of Life), has allowed him both time and opportunity to study the influence of writers on all future works. Dr. Bloom does so with depth, for instance, while he admits that, in Finnegan’s Wake, Joyce was influenced by Louis Carroll as many have pointed out; but Dr. Bloom also sees the influences of Milton, Tennyson, Joyce’s own work, and even Edward Lear.

The Anatomy has a certain charm that adds to its readability. It is full of anecdotes or off hand mentions of many, many other writers, mainly poets that readers will know well. For instance, in Literature as a Way of Life Dr. Bloom relates how Auden once asked to stay with the Blooms before a speaking engagement. “The poet arrived in a frayed, buttonless overcoat, which my wife insisted on mending. His luggage was an attaché case containing a large bottle of gin, a small one of vermouth, as plastic drinking cup, and a sheaf of poems.“ In Literature as a Way of Life Dr. Bloom writes about the significance his life with literature and its influences, it is understandable that he includes both criticism and anecdotes of those poets that are or were his friends and acquaintances in real life. Here, Dr. Bloom shows surprising sensitivity and emotion. Most readers will find these passages surprising and amazingly personal. He writes with deep respect of those friends that have passed on. A. R. Ammons, “We were very close from 1968 until he departed, a third of a century later, a friendship that refuses to end.”

Anatomy of Influence: Literature as a Way of Life is critical addition to the classic canon of Western literary criticism. Like Dr. Bloom himself, Anatomy is brilliant and full of clarity, honesty, importance, and grace.