The Anatomy of Competition in Sports: The Struggle for Success in Major US Professional Leagues 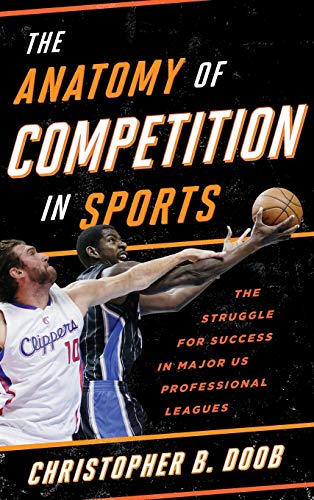 “There is certainly an audience for such work in the sports field.”

Books about the sports we love are plentiful and varied. Some, written by talented authors like Michael Lewis, Bernard Malamud, John Feinstein, and Roger Kahn offer great literature, both fiction and nonfiction. Others, however, fall into the “gee whiz” category, typically ghostwritten autobiographies of players who were prized for their athletic performance, but not their writing ability. A potential author must first determine his or her audience and then provide readers with what they seek.

Christopher B. Doob’s new book, The Anatomy of Competition in Sports: The Struggle for Success in Major US Professional Leagues, attempts to bridge the two genres. Filled with interesting facts about major American sports, the text also includes a multiplicity of clichés offered by athletes about their sports. An emeritus professor of sociology at Southern Connecticut State University, Doob ventures out of his discipline in this effort. Relying for the most part on web sources and not personal interviews, Doob explores six major American team sports: baseball, football, men’s and women’s basketball, hockey, and soccer.

The theme of Doob’s book is competition—not only on the field, court, rink and pitch, but also between athletes who contest for the limited opportunity to spend a few years as a professional athlete. Doob focuses his work on those men and women who make the grade, completing the arduous climb that starts in childhood and lasts until the inevitable—and soon realized—early retirement.

He sprinkles sports history into his narrative—his work on the history of American professional soccer is particularly noteworthy—but he also spends time telling youngsters who aspire to be professional athletes how to achieve their goals. For example, they must be fit and highly skilled and have self-confidence, hardly innovative insights. He describes in broad strokes the skills needed by those who play particular positions on a team, for example, strikers in soccer and defensive backs in football. Each chapter of this short book offers a buffet of topics, but, spread so thin, no particular topic can be ingested in depth. All discussions are interesting, but superficial, anecdotal, and derivative.

Doob’s writing would have benefited from a good editor. At times, the work is confusing and there are a few errors and omissions along the way. The entire project would have profited greatly from more use of the author’s expertise in sociology. When he ventures into his field— for example, by demonstrating that African American basketball players from middle-class backgrounds are better pro prospects than schoolyard players from the urban underclass—the results are quite interesting and informative. They provide added value to his work.

For the most part, Doob’s assessment of his six team sports is spot on. Football is a brutal contest—“reckless” and “primitive”—that leaves many of its participants crippled for life. Baseball, albeit safer for the athletes, can be a dull pastime that no longer feeds the insatiable thirst of American sports fanatics for excitement.

He ends the book with a chapter on “atypical athletes,” which seems to be filler and better suited for a magazine article, and finally with a discussion of the professional athlete’s life after sports. He offers examples of what some athletes have done without suggesting how common are the successes and the failures. The anecdotes do not do full justice to the topic. His concern, demonstrated throughout the book, about how youngsters can prepare for life as a professional athlete, should have been supplemented by a realistic appraisal of their post-sport prospects.

Although flawed, Professor Doob’s book is a great introduction for the sports neophyte. Even those experienced in the field will find something of value in this work. Some may find the book an inspiration to explore some of the issues presented in more depth. There is certainly an audience for such work in the sports field.