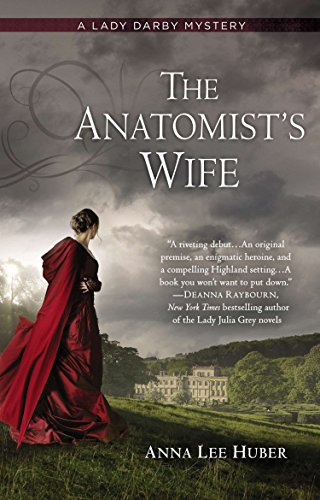 “If Ms. Huber continues writing her ongoing adventures in the same manner as The Anatomist’s Wife she is sure to have a successful career as a mystery writer.”

Anna Lee Huber’s book, The Anatomist’s Wife, sweeps up the reader with the first page, to be carried back in time to early 19th century Scotland to meet Kiera, Lady Darby.

Ms. Huber has designed this character as a smart, savvy, creative young woman who has been the victim of gossip and bullying by the upper-crust women in her social circle, yet comes out of a criminal charge innocent and with her head held high.

Months after her husband’s death, and her own brush with criminal charges, Kiera has taken refuge in her sister and brother-in-law’s estate in Scotland to escape from the gossip and accusations that seem to tag along after her. During a lengthy soiree at the estate, Lady Godwin, a guest, is murdered.

Now Lady Darby finds herself face-to-face with those same accusatory notes she had hoped to leave behind when the accusations ratchet up an octave as the ladies at the estate whisper that Kiera surely must be the murderer.

Because of her skill with the palette and paintbrush and her experience with drawing dead bodies that her husband had dissected, her brother-in-law, Phillip, encourages her to team with a private investigator, Sebastian Gage, to learn the truth about the crime.

Regardless of how hard she tries to avoid it, her attraction to a man she finds both exasperating and charming at the same time, becomes a web that is drawn tighter and tighter with each ensuing chapter.

Ms. Huber tells a good tale and develops her characters with clarity. She remains in the culture and social mores of the era, when women had no say and played the hand that was dealt to them, but she designs her heroine as a woman who straddles the line between 18th century behavior and 21st century independence.

Kiera knows her place but finds ways to side step it when necessary. Ms. Huber gives her heroine just enough rope to be independent but not enough to hang herself.

The story unfolds through logical deduction on the one hand and old fashioned clue searching on the other. The history of the murdered woman is peeled away layer by layer to reveal the true murderer after several red-herrings appear, but Huber keeps just enough clues close to her vest to not let the reader come to the correct conclusion until the end of the story.

Although the true culprit does appear several chapters before the very end, Ms. Huber’s final scenes project tension and conflict and while the reader knows Kiera will live to tell another tale, Ms. Huber has designed some harrowing scenes that keep the reader turning the page.

This story is the first of more to come with Kiera, Lady Darby, as the heroine. If Ms. Huber continues writing her ongoing adventures in the same manner as The Anatomist’s Wife she is sure to have a successful career as a mystery writer.