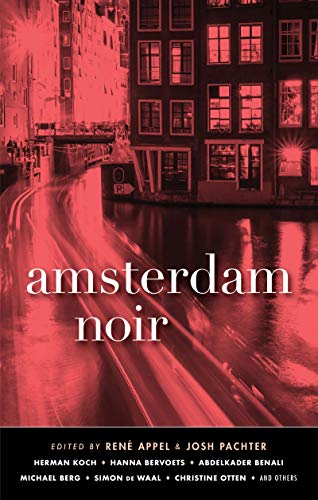 “Although Amsterdam Noir doesn’t hit the heights of other entries in the city noir anthology series, it remains an appealing compendium, with welcome doses of local color and atmosphere.”

Akashic Books’ city noir anthologies (which now number in the dozens, spanning cities around the globe) have an engaging mission: serve up crime stories of all stripes, while also providing a geographic and cultural tour of their locales. The latest volume in the series, Amsterdam Noir, stays true to form, serving up 15 tales that range all over the city, and if the stories themselves tend to fall a bit short by strict definitions of noir, they generally succeed in their aim to both entertain and edify.

Organized in four sections, with each section provided a film noir title to set the proper atmosphere (“Out of the Past,” “Kiss Me Deadly,” “Touch of Evil” and “They Live by Night”), the book takes full advantage of Amsterdam’s environs, from the obvious (those famous canals, that infamous red-light district) to the relatively unknown (the multi-ethnic slums just beyond the glamor and wealth of downtown). As one would expect from crime fiction, many of the plots concern the haves and the have-nots, and this collection features a generous range of protagonists, from struggling middle-class moms to young punks on the make.

Right from the start, the city’s internationalism is emphasized: Michael Berg’s vengeance-fueled opener “Welcome to Amsterdam” finds a Syrian refugee coming face-to-face with his torturer by chance, right in Schiphol Airport. In other stories, down-at-heel immigrants take the spotlight, such as Christine Otten’s ghoulishly breezy “Soul Mates,” in which a smart-aleck Algerian delivery boy gets involved with shady Chinese drug runners and falls for a classic femme fatale, casting himself as the not-so-reluctant star of a murder mystery that may or may not be imagined.

Sticking with the common noir trope of danger lurking close to home, most of Amsterdam Noir leans toward the domestic: next-door neighbors and buddies become perpetrators or victims, and nosy old ladies (such as the one in Karin Amatkmoekrim’s “Silent Days”) can be as deadly as any psychopathic gangster. Easy answers and pat endings are in short supply.

Two of the more haunting entries, Anneloes Timmerjie’s “Spui 13” (based on real events surrounding the disappearance of a muckraking journalist) and Abdelkader Benali’s “The Girl at the End of the Line,” circle around unsolved murders and their lingering consequences.

Still other stories are purely character studies, from the addled psychiatric patient in Loes den Hollander’s “The Stranger Inside Me” who talks to the ghost of Ted Bundy, to the bereft father in Simon de Waal’s “Salvation,” who holds vigil over the spot where his prostitute daughter met her tragic end.

While Amsterdam Noir succeeds as an overview of the city’s many faces, it’s less consistently compelling than other entries in the series. Editors René Appel and Josh Pachter do yeoman’s work in gathering a wide range of narrative voices and settings, but many of the tales come off as sketches rather than stories.

One such example is Appel and Pachter’s own contribution, “Starry, Starry Night,” which concerns a man named Vincent (no relation to Van Gogh, sadly) and his unfortunate run-in with his old street gang. Offering the briefest bits of background on Vincent and his new life, the story reads as simply an excuse to take a night stroll through Amsterdam’s Museum District.

The better tales hang their impact on meatier hooks. Max van Olden’s “Seven Bridges” builds its simple revenge premise atop a nocturnal boat ride through the canals, the suspense escalating in a manner that Alfred Hitchcock would have approved of.

Walter van den Berg’s “Get Rich Quick,” the most rollicking piece in the collection, follows a trio of hapless thieves as they attempt to rob a couple million euros off an autistic delivery driver, and stays truest to the golden rule of noir: Anything that can go wrong, will go wrong.

So although Amsterdam Noir doesn’t hit the heights of other entries in the city noir anthology series, it nevertheless remains an appealing compendium, with welcome doses of local color and atmosphere. If nothing else, it should inspire crime readers to scurry to maps of the area when it comes time to plan their next visit to the “Venice of the North.”