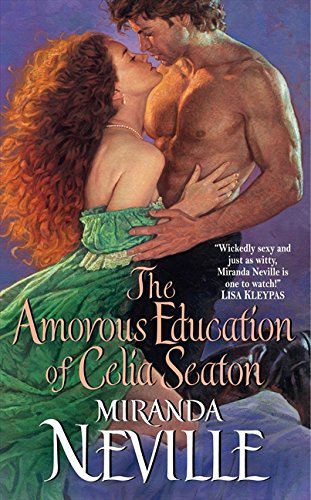 “The best description for this new novel from Miranda Neville is wonderfully adorable. The spirit, the joie de vivre, and the wit make the dialogue sparkle and the characters pop. . . . It’s delightful.”

The day that she was kidnapped, robbed, and left in a too-short shift was never going to be a great one for Celia. But insult is added to injury—quite literally—when the man who ruined her chances on the marriage mart with one mean spirited bon mot shows up. The villains who ruined Celia’s day have also left Tarquin shirtless, horseless, and memory-less. And though she hates Tarquin more than any other person in her life, Celia isn’t the kind of person to leave a man stranded—plus the kidnappers could come back at any time. And that’s how the two of them end up wandering the moors, half-dressed and alone, together.

Celia isn’t completely willing to let bygones be bygones, however, and rather than enlightening Tarquin to his high society identity, she invents a background, a new life story: one that includes an engagement. To her. Celia realizes she’s digging herself a hole, but with her life in ruins, she feels she deserves a little fantasy and a little protection.

And then there’s the matter of the informative little book in Tarquin’s sack.

Unfortunately fantasies don’t last, and it’s only a matter of time before Tarquin regains his memory, and Celia has to wake up to a reality in which she is not engaged, not protected, and has no hope of any more amorous lessons.

The best description for this new novel from Miranda Neville is wonderfully adorable. The spirit, the joie de vivre, and the wit make the dialogue sparkle and the characters pop. Celia, from whose point of view the majority of the story is told, is a great character: intelligent and snarky, with a strong sense of humor even when dealing with her devastating circumstances and uncertain future.

Tarquin’s transition from Terence to Tarquin (and then the recognition that there is, perhaps, more of Terence in Tarquin than he would have wanted or expected) adds to the poignancy of the resolution.

But what works best, and what readers will find most entertaining is that hidden book—the one Tarquin is carrying and that Celia finds. The one that jumpstarts Celia’s education. That one.

It’s delightful. Neville makes a note in an appendix that the book she uses in the narrative actually exists; a copy can be found in the rare book section of the British Library. This little detail just adds an extra dimension of fun to the story. The excerpts, the reactions from the characters, and the way that little book works to bring together the happy ending is what makes this novel that tiny bit different from other historical romances—and just that much more enjoyable.

Readers looking to be delighted won’t have to look any further than this novel.