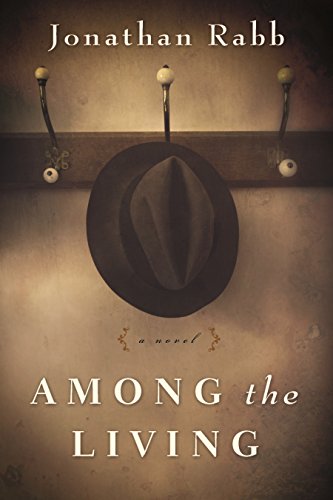 “If I can feel my heart breaking in this wretched way, then somehow I have come back. You would say that this is what any woman tells herself so she knows she is alive. To have this pain is to have hope. That must be the final gift from the Lager. Pain as a blessing, as a promise. This, as well, is something the innocents could never understand. In this way, you have given me back my life, unknowingly. I now save yours, and I do it willingly. Otherwise, all of this will have been for nothing.”

Among the Living is the story of a Jewish Czech man named Yitzhak “Ike” Goldah, who survives Nazi concentration and death camps. Before the war, Yitzhak was a noted journalist for a major European newspaper in Prague. His father was also a writer and an author. Almost all of Ike’s family was murdered during the Shoah.

After the war, Ike is reunited with his only remaining relative, Abe Jessler, and his wife Pearl. They live in the American south, during a period known as “Jim Crow.” Ike is swiftly absorbed into the vibrant Jewish community of Savannah, Georgia. The Jesslers are a well-known member of that community. Abe Jessler employs Ike in his shoe store. As Ike becomes acquainted with American customs and mores, some become an ethical burden.

Ike soon discovers that in America there are differences between Reformed and Conservative Jews and even more between black and white Georgians. The overlapping social strata of 1940s Georgia strikes a tender nerve with Ike. Rising from the ashes of the Holocaust, Ike despises all manner of racism and intolerance. His heart breaks for close friends who become victims of racial prejudice. Can a Jew who survived the Holocaust participate in an American white society that subjugates blacks?

Ike finds love with an American Jewish woman named Eva Weiss, whose husband was killed in WWII action. Eva is the daughter of Savannah’s eminent newspaper publisher. She and her young son struggle in the aftermath of the family tragedy. Eva visits Jessler’s shoe store and meets Ike. The more they see of each other, the deeper their love becomes. Eva’s father employs Ike as a journalist at his newspaper. His articles soon create interest from newspapers in large American cities.

Abe Jessler, in a moment of greed, agrees to work with a shady group of union interests. He soon finds himself immersed within a neverending series of crime syndicate payoff schemes. They mercilessly beat his young black employee. When a writer for Weiss’s newspaper discovers the trail of deceit leading to Jessler’s store, Ike is trapped between helping his only remaining family and serving the interests of his future father-in-law as an honest writer.

Into this apprehensive mix arrives a woman with whom Ike had relations before and during the Holocaust. Malke arrives from her temporary home in Oklahoma, seemingly knowing a great deal about Ike. While the content of their relationship in Europe before and during the Holocaust is unclear, Malke believes that Ike must drop Eva and marry her. As Ike had assumed that Malke was dead, her arrival causes Ike and Eva to drift apart. Eva is willing to allow Ike to “do the right thing” rather than compete against Malke. Who will Ike choose? Why? The ending is enormously suspenseful.

Among the Living is a fast-moving novel whose characters are varied, intense, vivid and expressive. Although this is a novel about a Holocaust survivor, the author spares the reader from copious details of life as a Jewish prisoner in Nazi death camps. Some appalling details may be better suited to the reader’s imagination, rather than repeated in terrifying detail. The setting and dialog quality reflect detailed, accurate and laconic research.

Far from an epic novel, Rabb has created a concise and compelling story, with viable characters and widespread use of tension and release. The strain between Reformed and Conservative Jews is aptly explored, as is the dichotomy between Ike’s European romantic interest and his new American love. Ike clearly has adjusted appropriately to his new life, while Malke remains a deeply broken woman who may never be able to love again.

The stress between black and white Americans is visible, although perhaps insufficiently reconnoitered. Fresh from his own near-death experience as a religious victim in Europe, Ike feels remorse at the way blacks are treated by Americans in the post-war South. So does Eva. This important aspect of the novel could have been more deeply explored. As with all things unsaid and undone between people of differing levels within a culture - obstacles often overshadow compassion. Emotion overrules virtue.

Ike’s personality and motivation are at the center of this inspiring and enlightening tale. His inner fortitude, moral compass and ability to love again make the story poignant and touching. On the other hand, his new love interest, Eva, is somewhat enigmatic. Her personality, especially in light of her husband’s death in military action, could have been explored more deeply. Her character details remain fairly obscure. Rather than describing iconic hero/heroine protagonists, personality flaws tend to enhance the image of a central character, enabling that person to appear more realistic and sustainable.

This novel is much more about the promise of life and love after WWII, rather than a recreation of the shock and brutality that readers already comprehend about the circumstances of the Holocaust. It’s about a concentration camp survivor and a war widow, both of whom seek to forge ahead as a viable human being. We see lovers flawed by tragedy, but with the courage to move on with life and love.