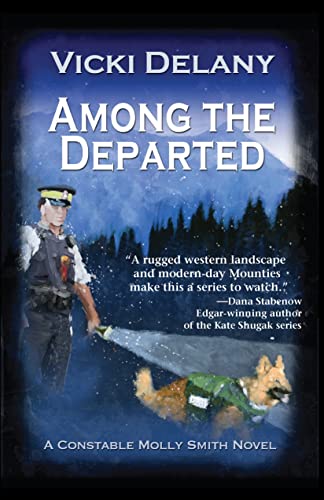 This is the fifth novel in the author’s Constable Molly Smith Mystery Series. I had not read any of the previous books in the series and was concerned my lack of background information on the main character would have an impact on my ability to comprehend and enjoy the story. I was wrong.

Vicki Delany has done an excellent job of transporting the reader to a small Canadian town in western British Columbia. Set in the mountains, Trafalgar is a quintessential setting where the stress and bustle of big cities is nonexistent and the vistas are heavenly. She immediately sets the tone by opening with a rugged, mountainous park scene where a family discovers their young child has wandered off from the campgrounds, and the parents are unable to find him.

Through this simple yet emotional event, we are quickly introduced to Constable Molly Smith, and subsequently, a host of other interesting characters. As one might expect, the venue is such that hardly anything escapes the attention of the locals. Everyone knows everyone’s business. We are treated to a variety of eclectic shops and personalities. We discover who is sleeping with whom, and catch a glimpse of Trafalgar society, such as it is.

Much of the story centers around the Novak family, whose husband and father, Brian, turned up missing years ago. The family never recovered from his disappearance—the wife turned reclusive, the son anti-social, and the daughter, well, I won’t give away too much of the story.

This is a well written yet easy to read mystery. The characters were interesting, fun, and some, even devious. The author mixed in a dash of good police work, which was both technically correct and believable. Along the way, Ms. Delany planted several teasers, and some readers may pick up on the clues. Those who don’t will be in for a surprise at the conclusion of the book.

Vicki Delany is described as “one of Canada’s most prolific crime writers.” I can’t attest to how prolific she may be, but I can certainly add that Ms. Delany is a fine writer who has created a wonderful book.