America's Bank: The Epic Struggle to Create the Federal Reserve 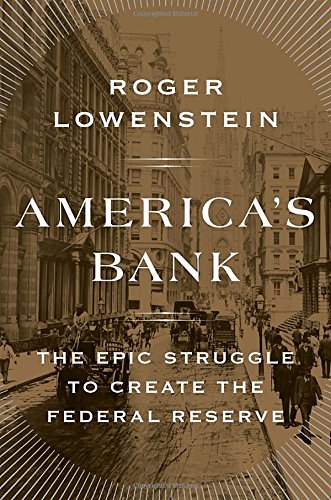 Without the Federal Reserve Bank, there might not be ecommerce or even an Internet, which both depend on money.  A century ago the country lacked the financial institutions to be globally competitive, let alone innovate in ways that characterize the 21st century.  America’s Bank is Roger Lowenstein’s highly entertaining, informative, and readable chronicle of The Epic Struggle to Create the Federal Reserve.

A strong bank makes possible commerce: locally, nationally, and globally. With a strong bank, people can merchandize their products and talents to distant places and concurrently buy things from different places. But without money, specifically reliable and transportable money, commerce is uncertain, ever problematic. This very practical problem was recognized in 1894 by Adam Noyes, writing in Political Science Quarterly, “Actual money cannot be shipped from New York to Denver in a day, and forty-eight hours’ delay may easily settle the fate of the Western institution.”

Early in the 20th century, the US “boasted the world’s largest economy; its vast territory was ribboned with railroad tracks and telephone wires. Its cities were bursting with factories churning out iron and steel.” The country was connected and integrated, expanding and growing its bank were “disconnected and isolated, left to prosper or founder, or fail” according to the reserves of each individual institution.”

At a time when every major industrialized country in the world had a strong central bank that assured its internal financial stability, the US financial system was “antiquated, disorganized and deficient.” As a consequence, unique among all major powers, the United States, “suffered a continual spate of financial panics, bank runs, money shortages, and, indeed, full-blown depressions.”

A strong central bank can provide stability and buttress the financial systems, when and as needed. Indeed, it was the very role the Federal Reserve fulfilled in the 2008/2009 financial crisis. Without a strong bank to parent the misbehaving banks, things could have been much, much worse.

As crucial as is finance to commerce today, not generally appreciated are the implications of how finance innovation lagged making innovation, for “the America of the late 19th century was an industrial powerhouse but a financial also-ran. The U.S. was a second-rate currency; incredibly the dollar was quoted in fewer country markets and in relatively puny Italian Lyra or Austrian Shilling.”

Prior to creation of the Federal Reserve Bank, “America was a monetary Babel, with thousands of currencies; each state regulates its own banks and they collectively provided the country’s money.” Although the country operated on a hard money basis, that itself was problematic because too little gold was in circulation.

In those times commerce was difficult, if not impractical “for anyone traveling to carry with him the coin necessary to meet his expenses for a protracted journey.” The problem of traveling with notes was that unless those notes were issued by banks in the leading financial centers such as New York, Boston, or Philadelphia, they would likely be refused or discounted.

But gold exchanged for notes in other places was problematic, too, especially since “notes from Western banks were notoriously unreliable. Bankers, not surprisingly, sought to circulate the papers as far as possible to the point of issue. That way, the notes might never—or not for a very long while—return, the bank avoided the annoying detail of having to redeem its debts.”

Roger Lowenstein is the Dean of Chronicling the Best and Worst of America’s Capital Markets—including books telling the story of Warren Buffet’s brilliance and success and the story of When Genius Failed about how Long Term Capital Management succumbed as too smart models designed by Wall Street gurus and Nobel economists did not account for black swan events.

America’s Bank models authoritative scholarly research, drawing extensively on a trove of unpublished papers from the Library of Congress, the Morgan Library Museum, and university libraries at Virginia, Stanford, Yale, Harvard, and Columbia, research that is chronicled in 61 pages of illuminating end notes.