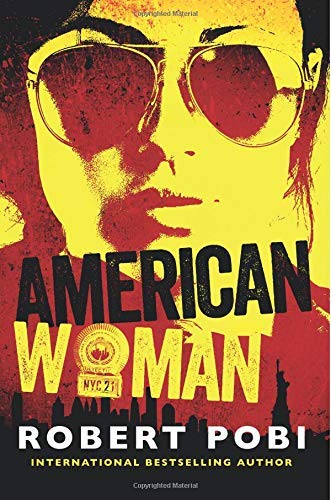 “So gripping the reader feels metaphorical hands around his throat, American Woman builds to a bloody, heart-stopping confrontation . . . If ever a suspense thriller deserves five stars, American Woman does.”

Not for the faint of heart nor the weak of stomach, American Woman by Robert Pobi is a gritty mystery about the stomach-turning acts of a serial killer who makes Hannibal Lecter seem almost benign.

Though not literally written with a pen dipped in blood, the images described by Mr. Pobi leave the reader with that impression, for there is no escaping the horrific scenes of victims mutilated and discarded by a murderer who terrifies New York City in the hot, humid days of late spring.

Six feet tall, beautiful despite her scars from a recent shootout, and Yale educated, Homicide Detective Alexandra “Hemi” Hemingway is not a woman who shies away from confrontation, be it with her fellow cops or a psychopath. “Hemingway stared down at the child, her interpretive software trying to convert the image of the dead boy into some sort of approachable geometry.”

Beyond the age of the dead boy, who would remain ten forever, Hemi is vulnerable to more than her usual rage at murder. It had been one of the toughest days she could remember. “The discovery she was pregnant, a carjacking, and a boy with no feet seemed like a triple-play dreamt up by an epic sadist.”

With her aging partner Detective Jon Phelps, Hemi embarks on an investigation in which the killer always seems one step ahead. Believing they have found the killer in the person of a pedophile, they arrive at his residence to discover his dismembered body. Once more, the killer has preceded them.

Not until the DNA results from the ten-year-old victims—soon there are several—leads Hemi and Phelps to a fertility clinic where treatment costs a half million a pop, do the two detectives feel they are closing in on the killer. “They had more than a lead—they had their case. She didn’t know where it was yet, but the boys were the key.”

Nothing comes easy in a murder investigation, and the DNA trail to the fertility clinic is a case in point. As the city swelters from a heat wave and Hemi tries to decide if she can bring a child into the evil she sees every day, the killing continues. Despite the massive police presence in the city, and the enervating hours she and Phelps spend investigating every lead, the killing goes on.

So gripping the reader feels metaphorical hands around his throat, American Woman builds to a bloody, heart-stopping confrontation with a killer whose identity leaves both Hemi and Phelps shocked and disbelieving. If ever a suspense thriller deserves five stars, American Woman does.