American Witness: The Art and Life of Robert Frank 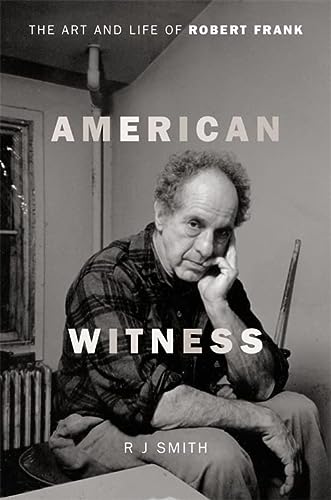 In the Beat Generation tribe, Robert Frank was the odd man out. Swiss-born, a photographer and a filmmaker, and not a novelist or a poet, he liked to stand behind the camera and not in front of it, unlike his buddies, Jack Kerouac and Allen Ginsberg.

Then, too, unlike them, Frank didn't want anyone to write his biography, though he allowed his friend, Charlie LeDuff, to write about him for Vanity Fair magazine in 2007.

Still, he would probably be forgotten today if it were not for the fact that Kerouac wrote the Introduction for The Americans, Frank’s brilliant book of photographs that was first published in Paris in 1958, in New York in 1959, and then republished in 1968 in a revised and enlarged edition.

It’s Frank at his best and an American classic, too.

Kerouac also recounted a road trip from New York to Florida with Frank. “It’s pretty amazing to see a guy, while steering at the wheel, raise his little 300-dollar German camera with one hand and snap something that’s on the move in front of him, and through an unwashed windshield at that,” Kerouac wrote of Frank in an essay titled “On the Road to Florida.”

In that essay Kerouac immortalized him as no one else has.

They were on the same wavelength. They were kindred spirits.

As RJ Smith shows in his new unauthorized biography titled American Witness, Robert Frank spent a lot of time on the road, not only with Kerouac, but also with Mick Jagger and Allen Ginsberg, who noted, “We had our Jewishness in common. We were rootless cosmopolitans together.”

Smith did not have Frank’s cooperation in writing his biography, and unfortunately none of Frank’s stunning photos appear in the pages of American Witness. In the Introduction to this book, Smith describes the times he tried and failed to connect with Frank, and failed, too, to obtain permission to sift through his files.

On one occasion, at an art gallery in Manhattan, Smith introduced himself and said, “I’m writing a book about you.” Frank replied, “Good luck.”

In that same Introduction, Smith writes that “In the piles and canisters and drawers, presumably, are clues to a lifetime’s worth of art.”

Smith did have access to the Robert Frank Collection at the National Gallery of Art in Washington, D.C. He also talked to Frank’s friends and colleagues such as Danny Lyon and Alfred Leslie. Moreover, he combed though nearly all the books and magazines that mention Frank, culling more than enough gems to illuminate much of his life and his art.

What emerges in these pages is the portrait of a quirky photographer and iconoclastic filmmaker who, in Smith’s words, “turned his back on success and found a harder way forward, taking a spider web of back roads to get as far away from a sure thing, the certain life, as he could get.”

One wants to like Frank, and yet at almost every turn in this biography there’s something about him that keeps him at a distance and that makes him unlikeable and unappealing. Indeed, he takes on the appearance of a lonely genius, and an exile in his adopted country who perhaps never forgave America for not recognizing his genius immediately.

At times he seems like a ghost haunting his own life.

Smith follows Frank from Zurich, Switzerland, where he was born in 1924, to New York, where he arrived in 1947 and then around the country that he photographer and filmed. He writes well, albeit briefly, about American photographers, including Walker Evans, Edward Steichen, Alfred Eisenstaedt, Diane Arbus, and Richard Avedon, and he describes the movies Frank made, such as Pull My Daisy (1959) with Alfred Leslie that features Ginsberg and with narration by Kerouac.

There’s also Cocksucker Blues, Frank’s documentary about the Rolling Stones 1972 tour of the U.S. that was never released, not surprisingly given the title. Frank knew how to butt heads, go against the American grain, and defy cinematic conventions.

Of The Sin of Jesus, Frank’s 1961 film, the French director Francois Truffaut wrote, “That’s the worst movie I’ve ever seen.”

Frank had a knack for offending the famous, the influential and the wealthy. When The Americans was first published it was described as “Un-American.” From the point of view of flag-waving, die-hard American patriots it was and still is un-American.

With each passing year, Frank seemed to withdraw more and more into his own shell. After a screening of Cocksucker Blues, before an audience of loyal Rolling Stones fans, he opened his mouth briefly to say, “There’s only one question I like to answer. My name is Robert Frank.”

Smith tries to be fair to Frank. He also tries to present a balanced picture, but time and again, Frank emerges as “dark and bitchy.”

Still, Smith shows how much a biographer can do when one doesn’t have access to files, notebooks and contact sheets. Perhaps his book is better than it might have been because he didn’t have unlimited access and wasn’t authorized to write the official story.

Many of the photos in American Witness are by Beat fellow traveler, John Cohen, including one of Leslie and Frank during the shooting of Pull My Daisy, probably the best ever Beat Generation movie.

There’s also Louis Faurer’s 1947 photo of Frank wearing a pinstripe suit and standing on a street corner, at the edge of a crowd.

In American Witness, Smith has focused on the crowd as much as on the man at its edge. In doing so he has offered a series of stark portraits of the kinds of Americans and Europeans that Robert Frank himself would have photographed.

Now, 93 years old, perhaps he might drop his guard for a moment or two and recognize Smith’s craftsmanship and his very fine biography.