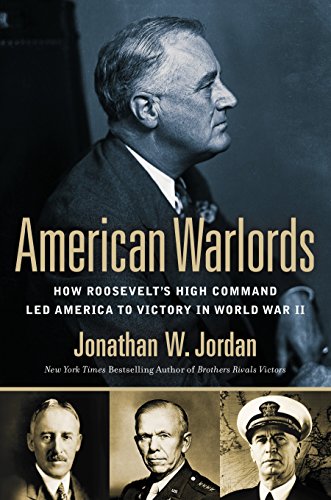 As the dust of World War II appears in the rearview mirror of our memories, it takes a special book to explain the inner workings of the Washington, DC, establishment of the late 1930s/early 1940s to rev our interest, and American Warlords: How Roosevelt’s High Command Led America to Victory in World War II by Jonathan W. Jordan certainly fits that bill.

Cataloguing the events of WWII is a gargantuan task, but one Mr. Jordan is up to. The complexities of that era and that conflict can all too often be expressed in mundane terms that will cause the reader to place a book somewhere on the bookshelf, unfinished. But Jordan’s book is different.

Jordan skillfully tackles the events of the late 1930s as the world gears up for war on two sides of the planet with America stuck in the middle. Swimming through these shark-infested waters required intelligence, cunning, wit, and determination—characteristics brought to bear by those closest to FDR.

The “warlords” were the small handful of men who surrounded FDR during the period leading up to and in to World War II. We have read about them in mundane academic tomes, but they did not jump off the pages into reality for us. These are names that rise up from history—names we studied in school, but never became friends with or admirers of until now.

Jordan provides a history of each of these men, takes the details of their lives, and blends them into an engaging read. He gives evidence of their politics of war—some seeing the handwriting on the wall and wanting to engage; others reading that same wall but preferring to remain removed, for as long as possible.

In American Warlords, Jordan’s access to the writings of these men through letters, journals, and diaries gives him insight into their personalities and the goals that drove them. Through these writings and his other meticulous research, Mr. Jordan injects humor, frustration, and sometimes sheer anger to describe the thinking of these men.

While Jordan breathes life into these characters and defines them based on their words and actions, he focuses most of his attention on three men - General George Marshall, FDR’s Chief of Staff; Admiral Ernest King, director of the Navy’s operations as COMINCH-CNO and a member of the Joint Chiefs of Staff; and Henry Stimson, Secretary of War.

General George Marshall was a thoughtful man who had the daunting task of running interference between FDR and his high command while at the same time stepping gingerly between FDR and Winston Churchill in order to refocus attention as needed.

Admiral Ernest King was bombastic—he was demanding and authoritarian, but extremely capable. He did not tolerate naval failures and was not transparent about them; he had little patience with civilians who had no naval experience and virtually no patience with the media. He instinctively sought resolution to problems the hard way and had no time for men who were willing to compromise.

Henry L. Stimson, although a Republican, served as Secretary of War (1940–1945) in both the Roosevelt and Truman administrations, and he was an innovative leader in pursuing war against Germany.

Although this book discusses his advisors, there would be no story without details about Franklin Delano Roosevelt. Jordan paints him as a man with very human characteristics, and the weight of the world, literally, on his shoulders.

When he made up his own mind on something, he was determined; he could be stubborn about issues if he felt strongly about them—advice be damned. He could be indecisive or wavering when confronted with a particularly knotty political question, or easily convinced on another, in particular with regard to Winston Churchill’s unceasing requests for American aid to fight the encroaching Nazi front. He could be swayed in two directions at once when faced with logical arguments.

The relationship between Franklin Delano Roosevelt and Winston Churchill is discussed throughout; this was a relationship that often got in the way of FDR’s closest advisors, and they tread lightly around both men. Regardless of what situation they encountered, the “warlords” had to use all of their cunning and imagination to keep Mr. Roosevelt on track.

It should be noted, however, that Jordan successfully weaves in details of many other characters and their contributions to the war efforts. Men such as General Dwight D. Eisenhower, General Douglas MacArthur, William F. Knox, Hap Arnold, Henry Hull, Harold “Betty” Stark, Henry Morganthau, Harry Hopkins, and a variety of other advisors cast a wide net across Washington, DC, during this time, each man contributing his experience to the task at hand—defeating the Axis.

Jordan’s research is exemplary; the detail he brings forth about the men of this time and the conflicts they faced, both outside Washington and inside, paints a picture of a small group of men who understood only too well what was happening on both sides of their world. They are presented in such a way as to be human on the one hand and almost superhuman on the other.

American Warlords provides scrupulous detail with almost day-by-day—certainly week-by-week—information that brings clarity to the challenges (political and non) faced by these men as they dealt with one another individually, as groups, and with FDR and Churchill.

Jordan details how these advisors addressed big things as well as small things. He covers a multitude of activities crucial to the war effort from major operations to bartering for equipment and the politics of power such as: the War Production Board (how clothes were designed, rationing and rubber; etc.); the School of Military Government (training officers tasked with rebuilding shattered governments on a democratic foundation); and issues from the Manhattan Project to Frank Capra documentaries.

Military operational names are often curious to understand and Mr. Jordan gives clarity to such names as BOLERO (steady buildup of land, air, and naval forces in the UK), SLEDGEHAMMER, (an emergency invasion of the French coast in 1942), and ROUNDUP, (the main invasion of France in 1943).  GYMNAST, ([changed to TORCH] was the British-American collaboration to invade French North Africa).

On the other side of the world, WATCHTOWER (the invasion of Guadalcanal), and RINGBOLT (Tulagi island) were slated for the Pacific Theater. Confusion often settled in among the leaders, especially when the names changed, or different co-names were assigned to each operation. Mr. Jordan explains these operations in detail and brings clarity to an otherwise confusing point.

The book flows logically from beginning to end, no small feat for a book that discusses this conflict. The direction does not wander down back alleys, but stays on track. At the end, Jordan’s epilogue provides a short, respectful discussion about the ends of the lives of George Marshall, Ernest King, and Henry Stimson, leaving the reader with a full understanding of the tremendous contribution these three men made to America with their service to an uphill battle.

This book is a must-read for anyone who desires to know more about that dust swirling around in the rearview mirror—that dust we call World War II.