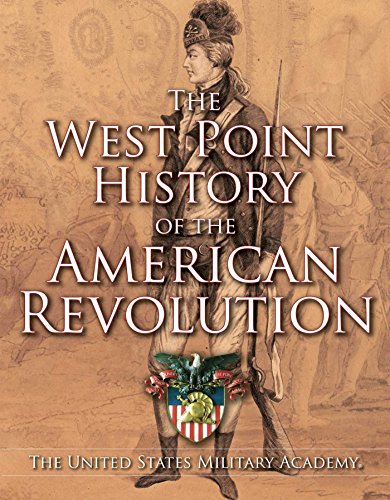 “sets the standard for a single volume military history text on the American Revolution.”

Rowan Technologies and Simon & Schuster continue their marvelous collaboration in this new volume, the fourth in series of hardcover books published on America’s major wars that are derived from the ebook military history series used by cadets at West Point.

The book has all of the outstanding features of their earlier volumes covering the Civil War and World War II: outstanding writing by leading historians, lavish illustrations, learning aids such as time lines, graphs and charts, and most of all, well organized maps of the major battles and campaigns.

The book begins with an introduction to colonial warfare and the equipment, training, and organization of the British and colonial militias at the beginning of the war. While it provides a brief background of the causes and actual outbreak of the war, it very quickly delves into the military conflict, organized into geographic and chronological sections from the northern to southern colonies.

In particular, the book concentrates on two of the critical campaigns of the war, Saratoga and Yorktown, within impressively detailed maps showing the sweep of each campaign and its associated battles.

One aspect of the conflict that this book does particularly well is place the American campaigns within the context of a more hemispheric and global conflict once the French, Spanish, and Dutch enter the conflict on the American side. Using both economic and other data showing how the British allocated their limited military resources, it is clear that the need for England to defend their home waters and the economically vital islands in the Caribbean drew off significant resources in the final years of the conflict, especially the warships of the Royal Navy.

The book makes a well-organized case that the need to defend global interests made a major difference in the military capacity of the British to defeat the colonial forces, even as the colonies neared economic collapse after almost six years of war, and contributed to the final and critical American victory at Yorktown.

Interestingly, one area the book pays scant attention to is the role of colonial loyalists in the war, noting their role in the southern campaigns of 1779–1781, but missing the larger picture of how the British disdained the sizable portion of colonists that remained loyal to the Crown, a significant untapped military resource.

As many of the cadets at West Point are likely to be taught by Iraq and Afghanistan veterans for a long time, it seems a discussion of the American Revolution as a successful insurgency against an occupying force might have made for an interesting viewpoint.

The book ends with an examination of the political and military struggles the country faced once independence was won and the need for a standing army became a controversial subject among citizens who just won their independence from the preeminent world power.

Faced with a standing Indian threat in the Northwest territories ceded by the British, the American government finally begins their first reluctant and tentative steps toward creating, maintaining, and deciding the role in their new republic of a permanent military force.

Like its predecessor volumes, this book sets the standard for a single volume military history text on the American Revolution. With its incisive analysis and excellent illustrations and maps, it offers a remarkable breadth and depth on the conflict that launched the American experiment.