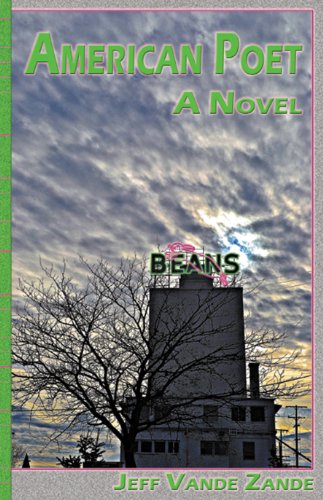 “Mr. Vande Zande understands attempts for grace under pressure as well as the dignity inherent in failure.”

Jeff Vande Zande’s new novel, American Poet, is an important book—a tour de force. It seems to do everything that an excellent novel does.

Consider this: A good book tightly grips its target readers and holds onto them to the end. Some good books make their main points so well that in the end readers not only clearly see what the author is saying, but also agree.

But really great books respect the reader’s intelligence and leave us thinking new things or seeing old things in new ways. A synthesis takes place in our mind and we close the book realizing it has provided a truly enriching experience. Simply put: American Poet is a success.

Denver, the protagonist and narrator, and author Vande Zande are both Saginaw natives and both poetry lovers, especially homing in on the work of Theodore Roethke, a Saginaw native; and that of d. a. levy, a contemporary.

Denver, a recent University of Michigan graduate and an unemployed, budding poet, considers what the two poets—Roethke and levy—say to him against the background of a decaying Saginaw.

He tries to save Roethke’s old house as a tribute to his poetry. He tries to deal with difficult people, his father, his girlfriend, and the police, but mostly he struggles with himself.

Frequently, Denver loses his temper and says things he regrets the minute they fly out of his mouth. His lack of self-control eats away at his confidence.

But poetry is Denver’s main concern, his chosen life. He writes about poetic freedom, exploration, and questioning. He feels that these elements amplify the importance of poetry. Frequently one sentence will make the reader stop in contemplation of what has been written. Denver looks at an untitled poem by d. a. levy.

Denver says, “I don’t know . . . something about the poem. I read it until I could finally make some kind of meaning from it. I didn’t want a professor to tell me what it meant. I didn’t need that. I could do it on my own.”

The plot progression in American Poet is steady and artful. Mr. Vande Zande’s transitions make sense, whether smooth or unexpected, they are always appropriate. The author surprises with instances of action fitting in among passages of thought and insights that are poetic.

Mr. Vande Zande and his character, Denver, are cerebral critics. Their views open doors to ideas, rather than using opinions to serve as closures. Readers will feel excitement akin to finding humor in an oblique joke. Denver writes about how the effect of words (his and those of other poets) is amplified by uncontrolled emotions and incomplete ideas.

Saginaw’s glorious days of exemplary commerce and celebration of the arts are dead. The modern decline of the city, combined with Denver’s account of Saginaw’s gruesome beginnings (greedy native tribes wiping out a peaceful, settled undefended tribe) result in strong artistic tension.

Further, Mr. Vande Zande handles emotion with a sure hand; he uses Denver’s detached voice to ironically show his emotional involvement with the earliest part of Saginaw’s history.

Denver’s account is written with brilliant understatement even though he is disgusted at the violence of Saginaw’s birth and at the city’s present state of decay. His efforts to restore the house that was Roethke’s home is symbolic, but only one of many symbols of loss. In American Poet, Denver himself is lost.

The dark sections on the book are effective in getting their point across. The ending is violent, but realistic; but the final image is hopeful: a huge neon sign of a pink rabbit, a famous Saginaw icon kept alive only by the charity of Saginaw’s citizens.

Mr. Vande Zande understands attempts for grace under pressure and also the dignity inherent in failure. As his protagonist says from his hospital bed: